The greatest to ever play the game, an innovator, a game-changer, an inspiration, a glass-ceiling breaker, a fashion icon, a once-in-a-lifetime kind of player, a sister, a mother, and a phenomenal woman. All of these have been used at one time or another to describe the Grand Slam Queen, Serena Williams.

Williams won her first grand slam at the US Open way back in 1999 when this sports writer was graduating high school, and Serena was just 17. I can't adequately express how moving it was to see a woman my age doing what she was doing. To better understand how long Serena's been relevant, fast forward to 2017 when a pregnant Williams won her most recent Grand Slam at the Australian Open, and yes you read that correctly, whilst pregnant -- women can truly do anything.

Williams has been inspiring and blowing fan's minds throughout her entire illustrious career and 23 Grand Slams. And here we are, one more Open, one more shot at a Grand Slam, one more chance to awe at one of the greatest athletes of our time. Can Serena Williams put the perfect exclamation point on an already historic tennis career?

Stepping into Arthur Ashe for the Last Time 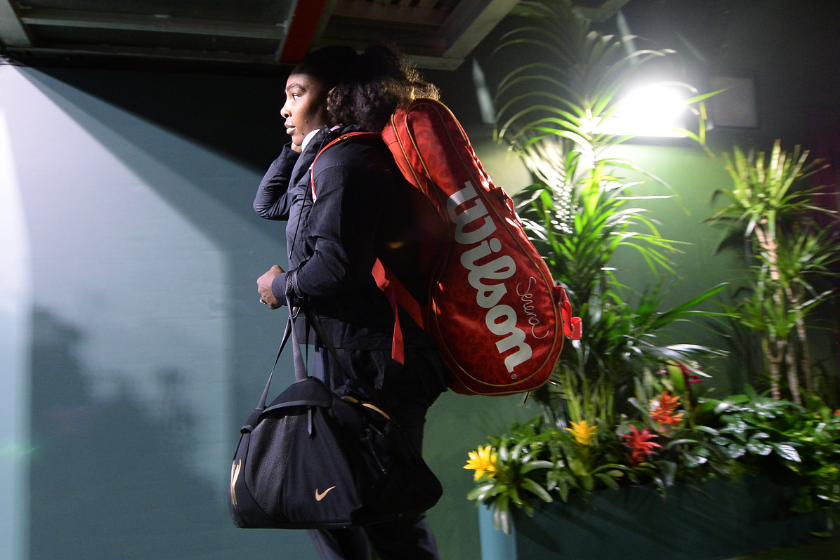 On the first day of the U.S. Open, fans will fight the infamous NYC August heat and humidity, like they do year after year, taking the 7 train to Flushing Meadows for the rare opportunity to witness Serena's final performance at Arthur Ashe Stadium in person as a women's singles tennis player. The final tournament of Serena Williams' US Open tennis career has arrived.

TV's across the world will tune in to see for themselves the magic that is the US Open and Serena Williams. The legend will be facing Danka Kovinic in the first round. Kovinic is a 27-year-old from Montenegro and the 80th-ranked player worldwide. Kovinic may not be a household name now, but after her first-round match Monday, she'll forever be remembered for her role in Serena's last time taking center court in Queens.

It's always funny when a legendary athlete's career comes to an end. Every sports pundit wants to weigh in on their career highs, career misses, and the magnitude of their legacy on the game. I suppose it's in our nature to break it all down and make sense of it all. But how do you make sense of such a rare talent? How can you measure their legacy or monumental influence? You can look at the stats, you can look at the championships, or "the Grand Slams", but that is never the full high-def picture. 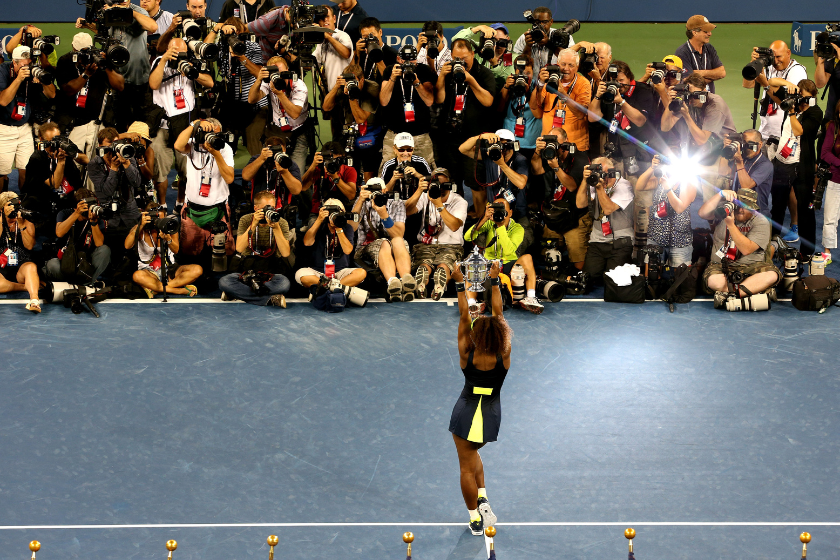 In fact, I'd argue that Serena Williams's impact not only on the game of tennis but on female athletes across the entire sports world is immeasurable. It's undeniable that Williams is one of the greatest to ever swing a racket, maybe even the best period, or at least she is according to Billie Jean King. If there was a tennis Mt. Rushmore she'd have more than earned her spot on the mountain. Heck, if there was a female athlete Mt. Rushmore she'd probably be there too. Williams has been able to transcend tennis and inspire and elevate outside of the game. Her voice, passion and activism has made, and will continue to make, a difference for all the young girls and women who come after her.

I only hope as Serena evolves away from the game she's saddened to leave, it will become clearer to her how monumental her contributions are. (I love this by the way, we're all constantly evolving, this verbiage is yet another game-changer courtesy of Serena.)

One of the weirdest things to do, both as a player and fan, is to recognize you're living in a history-making moment as it happens. And when we look back and analyze, as so many of us will, these last 27 years of Serena's professional tennis career, we should all celebrate what a gift it's been to watch her elevate the game.

This is an athlete who has more single Grand Slam Tournament wins than every tennis player but one, both male and female. Margaret Court (24 Grand Slams) is the only tennis pro with more Slams than Serena's 23. Rafael Nadal holds the first spot for men's singles with 22, most of which came from his domination of the French Open. In total, she has won 39 Grand Slam titles, including 14 women's doubles crowns with her sister Venus Williams and two mixed doubles titles. She also has four Olympic gold medals - one in singles (2012) and three in doubles (2000, 2008, 2012). All told, the younger member of the Williams sisters has amassed 73 singles titles over her illustrious career.

Yet, despite all the accolades and stats, there will be haters who try and diminish her greatness and not entertain her name being mentioned over the male greats of the game. Serena's never allowed the critics' words to make her small. In fact, she's used their doubt as fuel to win games, andnd her dominance has clearly inspired the younger generation of female pros, like recent US open winners Bianca Andreescu and Emma Raducanu, who won the women's singles final last year. Naomi Osaka, who defeated Serena in the US Open Finals back in 2018, shared some of her thoughts while prepping for the upcoming US Open. The young star has always been vocal about her admiration for Serena and how much Williams has paved the way for not only her, but the next generation of athletes.

"I think that her legacy is really wide to the point where you can't even describe it in words," Osaka said. "Like, she changed the sport so much. She's introduced people that have never heard of tennis into the sport. I think I'm a product of what she's done."

Osaka continued, "I also was trying to figure out how to sum it into words. I honestly think that she's, like, the biggest force in the sport. That's not intentionally trying to, like, make [Roger] Federer or [Rafael] Nadal smaller. I just think she's the biggest thing that will ever be in the sport. It's just really an honor just to watch her play." 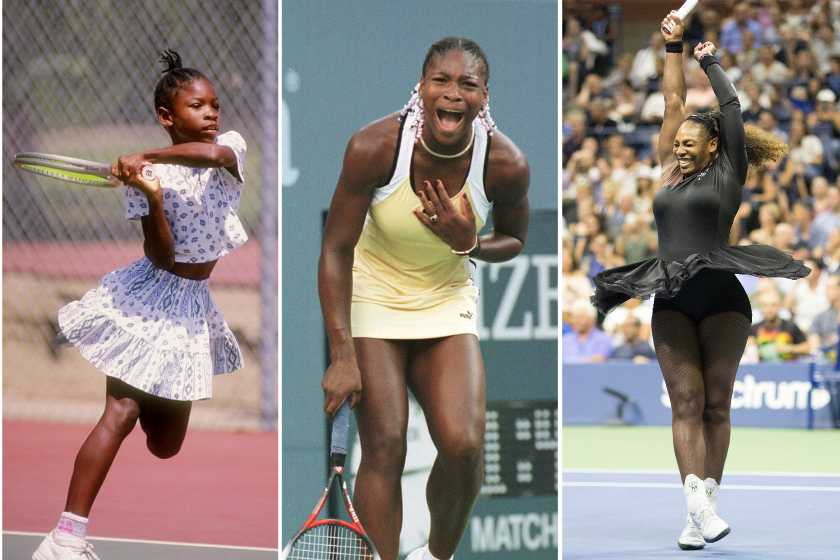 We may never fully see how far the ripple effect from Serena goes, as it will continue to grow long after she's swung her final racket. For generations, Williams has been a part of the discussion and despite her decision to move on to the next chapter of her life, she'll always be part of the discussion. A player at her level could never be forgotten. The tenacity within the star, despite all the adversity she's faced throughout her career, and personal life guarantees her success moving forward. Serena Williams doesn't give up, doesn't quit, and doesn't do goodbyes.

In her beautiful self-penned "retirement" piece for Vogue, she talks about the sadness woven in her decision to leave the game she still loves. I find it just as maddening as she does, that female athletes are often faced with choosing family over extending their careers. I can only imagine how difficult it was for her to make this decision.

I can say, with confidence, we are all lucky to have watched her play for the last 27 years. To have been inspired by a young talent from Compton who fought, trained, and finessed with an unparalleled passion for tennis -- well, it's been an extraordinary ride. Women's tennis will never be the same.

So thank you Serena, on behalf of your worldwide fans, thank you. I could try and write a proper ending to celebrate your magnificent career. Instead, I'll give you the last word because you deserve it. I'm just lucky to be given the opportunity to magnify your voice and your brilliant, legendary career -- because Serena, it truly was the stuff of dreams, and we will miss you.

"Unfortunately I wasn't ready to win Wimbledon this year. And I don't know if I will be ready to win New York. But I'm going to try. And the lead-up tournaments will be fun. I know there's a fan fantasy that I might have tied Margaret that day in London, then maybe beat her record in New York, and then at the trophy ceremony say, "See ya!" I get that. It's a good fantasy. But I'm not looking for some ceremonial, final on-court moment. I'm terrible at goodbyes, the world's worst. But please know that I am more grateful for you than I can ever express in words. You have carried me to so many wins and so many trophies.