“The Natural” Is On Netflix, Just In Case You Forgot About Roy Hobbs 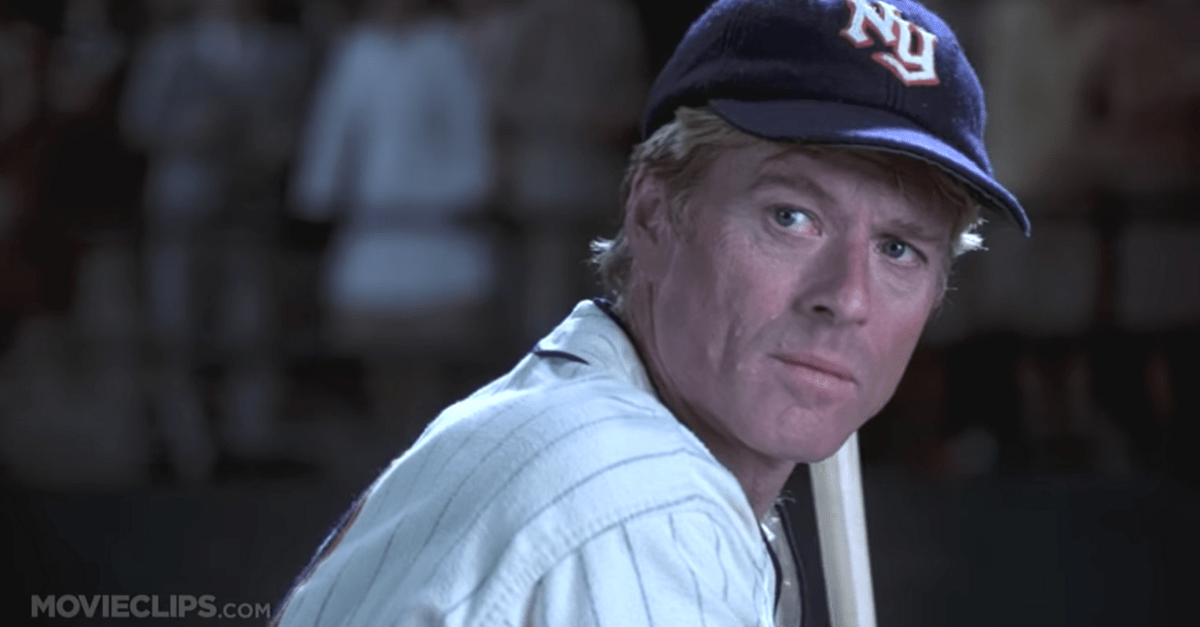 The first time I watched Barry Levinson’s 1984 film The Natural, I wasn’t exactly sure what to expect. It had been 35 years since Robert Redford laced up his cleats as Roy Hobbs by the time I sat down to watch a movie that ? sports fan or not ? everyone raved about.

I’ve seen them all. Remember The Titans. Rocky. Hoosiers. Raging Bull. Friday Night Lights. Slap Shot. Any Given Sunday. You name the sports movie, and it’s probably graced my television at one time or another. But after watching The Natural (twice), I cannot create a list of my favorite sports movies ever without shouting out, maybe, the best baseball movie ever made.

Roy Hobbs ? played by the iconic Robert Redford ? is a mix of God-given talent and supernatural intervention. Following the death of his father as a boy, the small-town kid from Nebraska makes a wooden baseball bat from a tree that’s struck by lightning. Hobbs burns a lightning bolt onto the barrel and names it “Wonderboy.”

As a young adult, Hobbs’ talent sends him to a tryout with the Chicago Cubs. During a stop in his journey, he gets into a bet with a sportswriter and Major League Baseball player named The Whammer (a silent ode to Babe Ruth), who Hobbs strikes out on three pitches. However, Hobbs is targeted by a mysterious woman and shot in the stomach, effectively ending his run at pro ball.

Some 16 years later, and now in his mid-30s, Hobbs joins the struggling New York Knights baseball team as a rookie. Club manager Pop Fisher doesn’t like the idea of an “unknown” player joining his team, but Hobbs, with some help from “Wonderboy,” tears the cover off a baseball in his first at-bat. Hobbs’ legend grows, the team improves, and the movie tracks the once-forgotten talent’s rise to the top of professional baseball.

I won’t spoil the ending, but I will say this: There’s not a single sports film that compares to the chills I got watching the movie’s climax and finish.

Is The Natural a True Story?

OTD 1949: 19-year-old Ruth Ann Steinhagen (pic) shot Phillies 1st baseman Eddie Waitkus after luring him to her Chicago hotel room. The incident was inspiration for famous piece of the story in the 1984 film "The Natural" starring Robert Redford. pic.twitter.com/wpJzu6vTfo

With a plot like this, you’d think it was totally fiction, right? In fact, key moments of the story actually happened with fictional elements written into the storyline and adapted from Bernard Malamud’s novel that was published in 1952.

The most obvious is the femme fatale who shot Hobbs named Harriet Bird; She is portrayed by Barbara Hershey. In reality, a woman named Ruth Ann Steinhagen shot and nearly killed Philadelphia Phillies first baseman Eddie Waitkus on June 14, 1949. Steinhagen stalked Waitkus for several years before then, even building a shrine to the star MLB player and following him to restaurants. Though they’d never met, Steinhagen invited Waitkus to her hotel room with a hand-written note shortly after watching him play a game against the Chicago Cubs.

She shot Waitkus in the chest, spent a few years in an institution after pleading insanity, and was later released. She died at age 83 back in December 2012 in a Chicago hospital.

#OTD in 1909, Michael “Doc” Powers passed away at the age of 39. Here’s my painting of the man with the Athletics in 1902. pic.twitter.com/TYlDcsBOUc

The film’s other link is the death of Bump Bailey, the New York Knights player who died after crashing through the outfield wall, opening the door for Hobbs to join the starting lineup. It’s believed Bailey’s death may have been inspired by Doc Powers, who died under strange circumstances back in 1909 after he crashed into a wall while playing for the Philadelphia Athletics.

When Rodney McCray famously ran through an outfield wall back in 1990, his story brought The Natural back into the public eye.

The Natural is a who’s-who of Hollywood stardom in the mid-1980s. The movie was nominated for four Academy Awards including Actress in a Supporting Role (Glenn Close), Cinematography (Caleb Deschanel), Art Direction, and Music, thanks to the iconic score by Randy Newman.

Kim Basinger was nominated for the Golden Globe Award as Best Supporting Actress, too.

Is The Natural on Netflix?

It sure in the heck is, and during the coronavirus quarantine of 2020, there is no better time for baseball fans to sit back and rewatch an all-time classic sports movie featuring, what I believe, is the greatest fictional baseball player to ever do it: Roy Hobbs.

This article was originally published March 18, 2020. It was updated to reflect editorial corrections that Eddie Waitkus was not killed by Ruth Ann Steinhagen in 1949. He spent several months in the hospital, but returned to Major League Baseball and retired from the majors in 1955.