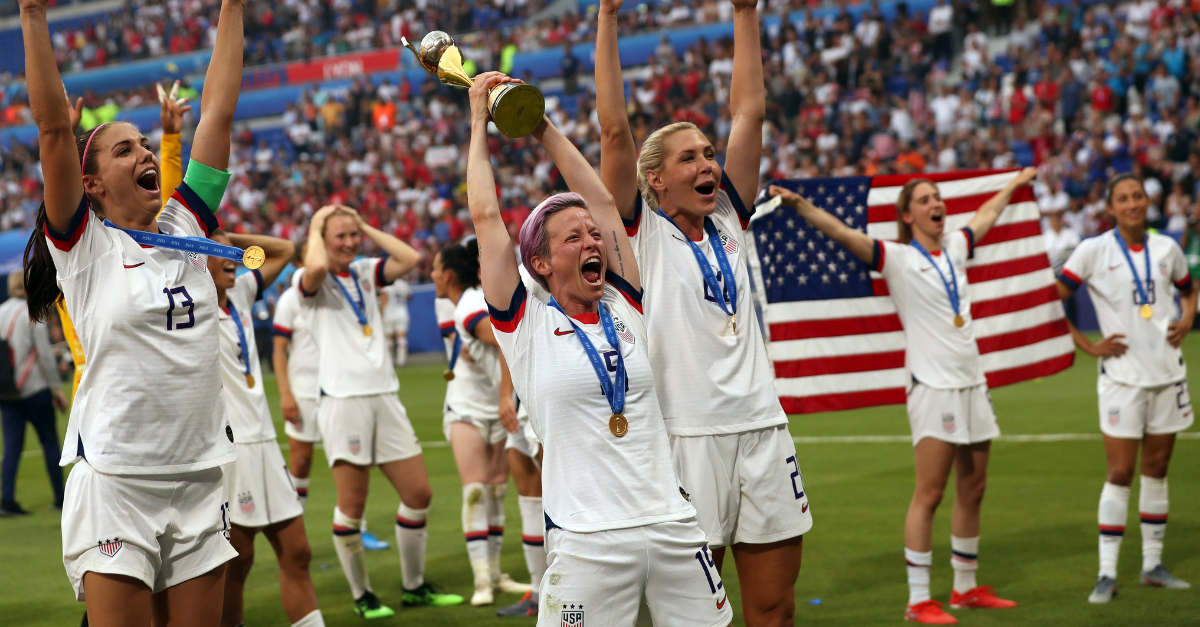 What the U.S. Women’s Soccer Team did at the 2019 FIFA Women’s World Cup was nothing short of the greatest single performance in U.S. soccer history. The women scored 26 goals in seven games, the most-ever at a WWC. Coach Jill Ellis became the second coach in history to win back-to-back World Cup titles, joining Italian men’s coach Vittorio Pozzo (1934, 1938). The United States now own four of the eight all-time Women’s World Cup trophies, by far the most of any country.

Despite all their success in France, including Sunday’s 2-0 win over Netherlands at the final in Lyon, these women made just as many enemies as friends back in their home country.

To some, the USWNT were powerful symbols of success. Their over-the-top celebrations, unrelenting pressure against inferior competition, and complete dominance helped them sell more Nike jerseys than any other soccer team in history.

To others, they were arrogant, brash, blinded and ignorant to the country they represented. Spearheaded by a series of comments made by co-captain Megan Rapinoe throughout the tournament, including her refusal to sing the country’s national anthem in protest of President Donald Trump, the U.S. Women’s National Team returns home as both heroes and villains.

Their victory celebration didn’t help their cause at all, either.

After receiving the Golden Boot and Golden Ball trophies ? as the tournament’s top scorer and best player, respectively ? Rapinoe, Alex Morgan and Allie Long took a chance to pose for the cameras and hoist the trophy valued around $30,000. But Long, who was holding an American flag at the time, cast it aside, aided by Rapinoe’s wave to simply discard it, so the trio could grab a picture in front of the cameras.

The saving grace of this is fellow U.S. soccer player Kelley O’Hara, who raced in and immediately scooped the flag off the ground as her teammates danced and posed for the crowd.

Is this for real? Did she drag and drop the #USFlag? pic.twitter.com/GgWKGQbqyL

John Tiegen, a former United States Marine who survived the 2012 Benghazi attack, was one of thousands who took to social media to condemn what happened.

“@uswnt I know you gave a brief to the girls on proper flag etiquette. @allie_long_ , I know dragging it on the ground and throwing it down like it?s a piece of paper isn?t part of that. It?s not hard to hand it off and celebrate. Your coaching staff or trainers are there to take it. Damn Amazing disrespect for a photo op. Thank you to I think @kelleyohara for running in there and picking it up.”

It’s one thing for people to point and say that this was deliberate on Long’s part. (Let’s be clear, it wasn’t.) But what this really is about is the careless attitude towards our national symbol, and U.S. women’s soccer isn’t alone in that.

The U.S. Flag Code details numerous flag etiquette laws, many of which you see broken and forgotten about every day by millions of people at sporting events, during community and school functions, etc.

Here are a few examples from the full code:

“During rendition of the national anthem when the flag is displayed, all present except those in uniform should stand at attention facing the flag with the right hand over the heart.”

“The flag should never touch anything beneath it, such as the ground, the floor, water, or merchandise.”

Before you crucify these women for dropping the flag while celebrating a monumental World Cup victory, let’s make sure everyone you see is showing that same respect for the flag, too. Yes, Long and Rapinoe were in the wrong for what they did, but maybe it’s time we look in the mirror and re-think how our society as a whole views the most iconic symbol of the greatest country on the planet.

I see thousands of people talk, eat hot dogs, and drink beer at summer baseball games while the anthem plays. I don’t see them being bombarded with hate, do you?