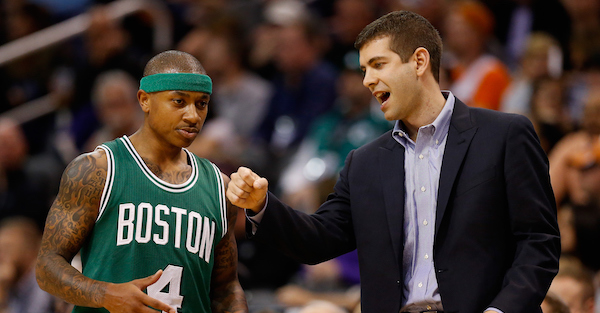 PHOENIX, AZ - FEBRUARY 23: Head coach Brad Stevens of the Boston Celtics talks with Isaiah Thomas #4 during the second half of the NBA game against the Phoenix Suns at US Airways Center on February 23, 2015 in Phoenix, Arizona. The Celtics defeated the Suns 115-110. NOTE TO USER: User expressly acknowledges and agrees that, by downloading and or using this photograph, User is consenting to the terms and conditions of the Getty Images License Agreement. (Photo by Christian Petersen/Getty Images)

The Boston Celtics’ attempt to land a true playmaker with the No. 3 overall selection in the 2016 NBA Draft hasn’t come to fruition just yet.

Related: Kevin Durant reportedly to meet with teams in L.A., interested in this one squad

On the other end of the spectrum, the Philadelphia 76ers are reportedly attempting to trade back into the top 5 after landing the top spot in the draft. The Celtics are a reported possible trade partner, as Philly is offering either Jahlil Okafor or Nerlens Noel.

With just over 24 hours head of the draft, expect talks to truly heat up.