We are back with the Best Bets column after a one-week hiatus. It hasn't been the perfect season for me (16-19 overall, 3-6 in body part wagers) but everyone knows that REAL FOOTBALL doesn't start until the calendar hits October. Until then we are just building up our mental and physical toughness for the stretch run, and I feel as mentally and physically tough as the suburban mother who accidentally dominated the Pittsburgh Steelers in pickleball this summer, just a total savage.

As bad as three games under .500 is for me, I am writing this in San Francisco and the person outside my window scream-singing incredibly off key sounds like he must be way way worse than three games below even. #perspective.

I LOVE the slate this week and I am ready to crush it. I am getting back to my roots, which is sniffing out the DOGS and getting into a zen game flow state of mind to accurately predict the over/unders. Bad news for bookies is I just ate a whole California avocado, so yeah, you could say I'm in a {game} flow state.

And now to quote my singing neighbor's mid-song interlude "everybody Jesus just put your hands together", because here are three bets I love, two bets I adore and two bets I would sell my kneecaps for!

At one point during last week's Bears' game, the most astounding graphic I have seen in a long time appeared. It read something to the effect of: "Bears Red Zone Play Selections: 19 Runs, 1 Pass". When it popped up on screen, I nearly choked on my Modelo Negra because I thought my life had become Bill and Ted's Excellent Adventure and I had gone in a time machine back to 1965.

I mean, look, I get that Justin Fields isn't everything we thought when he was selected 11th in the 2021 draft but, even If I am the quarterback of the Chicago Bears we should be throwing more than one out of every 20 red zone snaps, and the last football I threw was a Vortex with the whistle tips 'woo woo'.

What I am saying is that the Bears offense has been the opposite of explosive (implosive?) and predictable. However, they match up really well against the Vikings. The Bears defense has been very good against the pass, solid at limiting points (because they run the ball a lot on offense) and strong in the red zone. Meanwhile, the Vikings have the 23rd ranked rush defense and the Bears run the ball well.

So I'm going to make this easy for you- both teams will try to run the ball a lot Sunday. Both teams will probably suck in the red zone. This means a lot of field goals and a limited number of possessions, which means it's not going to be a larger margin of victory than a touchdown. Bet the divisional dog here and make the money. Boom.

This one feels like a slam dunk. The Falcons have been laughably bad at how they are utilizing former first round tight end Kyle Pitts, to the point that it has become a meme. Meanwhile, their best offensive player, Cordarrelle Patterson, was placed on injured reserve.

The Bucs defense has kept point totals low, with the exception of last week's Chiefs game. They remain very hard to run against, which like Forrest Gump, is the Falcons preferred method of travel. Even if the Bucs manage to put up 30 points, it would likely be in a rout that keeps the under very much in play. Instead, we are most likely looking at a game that will probably have very few first half points and by the time Tampa Bay pulls away, the under will be all locked up. Boom.

Baker Mayfield has been so poor in the early season that even he agrees with the criticism that has been levied against him and Baker always feels like the world is unfair. So I get that betting on Baker isn't the sexiest bet ever made, but hear me out.

The 49ers have been a drastically worse offense on the road in the early season, scoring only ten points in each of those road games, and now they have to make the cross country trip to play the Panthers.

While San Francisco has had a dominant defense, the Panthers have suddenly remembered how to use Christian McCaffrey in the passing game, which should be huge for slowing down the 49ers pass rush. I expect this game to be low scoring (like most 49ers games are) but Carolina keeps this easily within a TD at home. 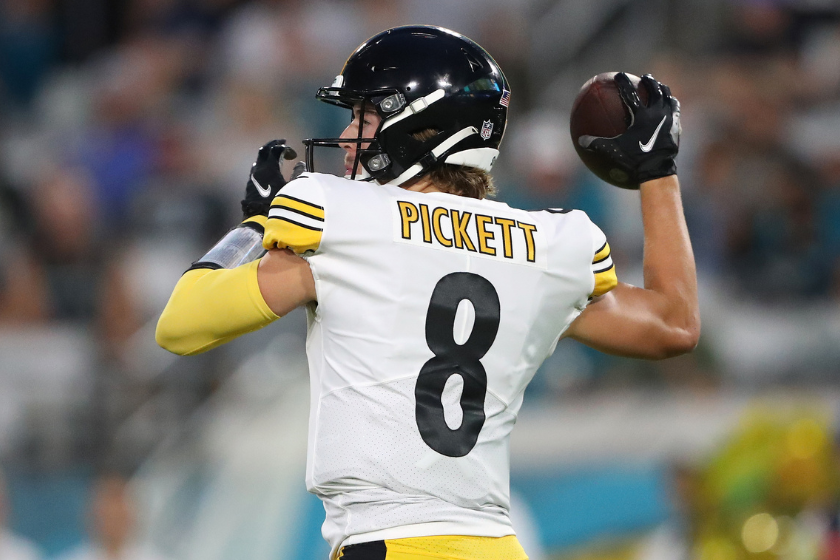 Pittsburgh at Buffalo: Total Points Under 47

The Pittsburgh offense is a total joke and now they are starting a rookie quarterback against one of the best defenses in the league. Three of Kenny Pickett's first 13 passes in the NFL have been interceptions and now he is going to play in Buffalo, where winds are expected to be roughly 18 miles per hour. Good luck. Sounds like it's time for the Steelers to go back to running Najee Harris straight into the center of the line for 2.5 yards a carry again, while Mike Tomlin gives us some ridiculous press conference about all the various things that are "unacceptable".

Once the Bills get ahead this will be open season on Pickett turnovers, and we are looking at a game that will likely have Buffalo resting starters down the stretch. Pittsburg *might* come back to cover an egregious two touchdown spread, but this game has no chance of going over 47 points. You'll thank me for the free money about halfway through the third quarter. Boom.

Let me get this out of the way right now, I'm not a long-term believer in the Cardinals unless DeAndre Hopkins has a transcendent impact when he returns. However, the Cardinals do have the fourth best rush defense in football, and that's how you keep games close against the Eagles.

Philadelphia is the only undefeated team left in the NFL, but they have had the benefit of a very easy opening schedule. They are banged up in the secondary and don't match-up well against the speed of the Cardinals offense.

Arizona is fifth in the league in time of possession and several long scoring drives coupled with an ability to keep Jalen Hurts in the pocket is a great recipe to defend their home turf. This feels like a game the Cardinals win outright by forcing Hurts into long passing situations, exposing the biggest weakness of this Philadelphia team. Boom.

Bets I Would Bet My Kneecaps For 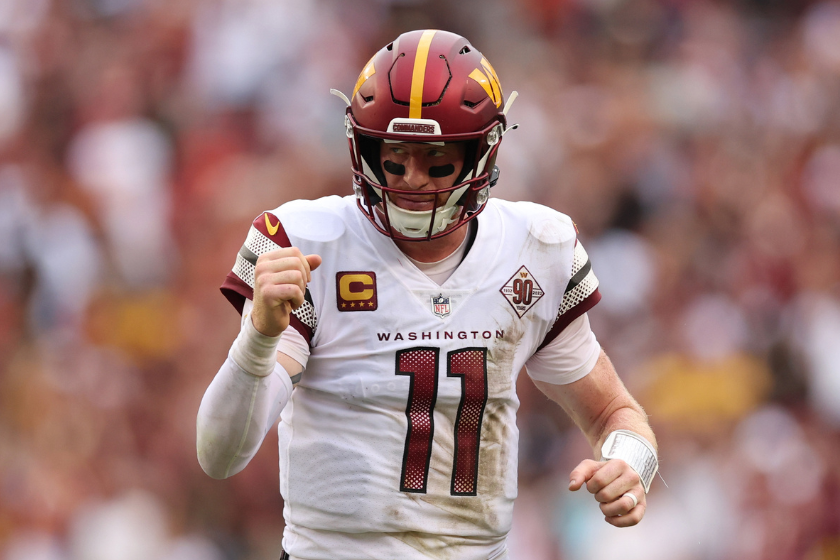 I don't know what the street value of a kneecap is, but it certainly seems like one of those things where yours is more important to you than it could possibly be to anyone else.

That being said, if I don't win these two bets, there might be someone coming for my kneecaps anyway so I might as well put them on the line right here.

Chicago at Minnesota: Total Points Under 44

That's right we are taking the under and the underdog in this game. I already wrote a ton about how Justin Fields is being kept on an unfathomably tight leash, so I won't repeat myself but this game is ripe for three yards and a cloud of dust. The Bears run it over 60 percent of the time which is great news if you are looking for a short game that hits the under. The Vikings and Bears are both in the bottom third of the league when it comes to turning red zone possessions into touchdowns.

Kirk Cousins leads the league in red zone interceptions and Justin Fields would have more of them if he were allowed to throw at all in the red area. This game will be gross and I am sad we all have to watch it, but it will be close and it will be low scoring and that is all we need to make money in this world. Boom.

Tennessee at Washington: Total Points Over 42.5

Carson Wentz, I just can't quit you. I've put the Commanders in this high stakes part of this column where I bet a body part several times, and it has not paid off- but that's what doubling down is all about baby. It honestly makes no sense to me that this total is so low.

First off, Tennessee has the number one red zone touchdown percentage in the league. Secondly, both of these teams are near the bottom of the league in points allowed, each giving up more than 25 points per game. That means if they hit that average, we will clear this total by a touchdown.

Wentz has thrown for over 300 yards and three touchdowns TWICE already this season and the wide receivers on the Commanders pose a mismatch for the Titans.

This game demands that both teams score in the 20s. I demand it too. Both teams can't cover in the secondary. They both can't tackle.

This week... just when I think he can't possibly be any dumber, Carson Wentz is about to go do something like it's 2017, and totally redeem himself. Boom.