The NFL regular season is nearly upon us, and one of my favorite things to do each year is pick the win totals for a few teams to place some futures bets on.

First, I want to explain a theory I have when it comes to betting over/under win totals, and I stole it from that movie "The Big Short", so you know it's legit. The two young guys in the film who end up working with Doomsday-prepping Brad Pitt, well they invest based on the strategy that "people hate to think about bad things happening, so they always underestimate their likelihood."

This is our secret sauce for the sweet dish of success when it comes to betting NFL win totals. Regular fans put their rose-colored glasses on and bet the over on their favorite team's win total because they can't imagine enduring a season where they are out of the mix by Thanksgiving, but we all know the story. Their team will let them down again even though everything was supposed to be different this year. It won't be. Hope is the cruelest mistress. That's why 6 of our 9 bets are unders. We will drink that false hope for breakfast.

So with that in mind, here are our nine favorite win total futures broken up into three categories. 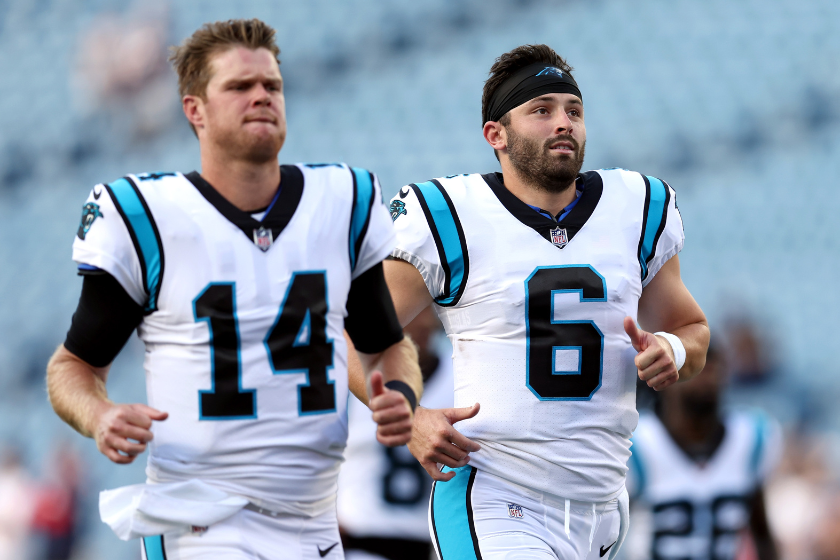 If you've heard it once, you've heard it a thousand times: "If you have two quarterbacks, you have no quarterback." The Panthers are a philosophical mess. The reality is both Baker Mayfield and Sam Darnold turn the ball over far too much when forced to make a play. The offensive line was one of the worst in the league last year and PFF ranks it 24th of 32 this year (which I think is optimistic).

Yes, the Panthers play in an awful division, but they still have to face Tom Brady twice. Head coach Matt Rhule has shown me nothing other than a lack of accountability and the fact that he might not be on the same page as the GM and offensive coordinator Ben McAdooo. You think this team is going to win seven games? It's not happening -- we are looking at a team fighting to win four.

If you're a gambling person your immediate thought should be "you are betting the under on the team with the lowest win total on the board, that is an absolute suckers bet." To which I would reply "That's exactly what Vegas wants you to think."

Yes, the Texans total is low but the thesis statement behind this pick is simple: Never underestimate the race to the bottom.

If you are the Texans, what are you hoping for this season? You are rooting for some exciting moments from the few young guys on this squad and for the team to lose as many games as possible to secure a top-three pick. That's it.

It is what the front office should be rooting for as well. They also have to play against the talented AFC West. The Texans should have a very interesting week 18 game against a Colts team likely to be sitting all of its starters, while the Texans won't want to win either and risk dropping two to three picks down in the top of round one of the draft. That game will be the Texans Super Bowl. Here's to hoping they "win by losing" that final game, and we hit the under, but I'm honestly not even sure we will need it. 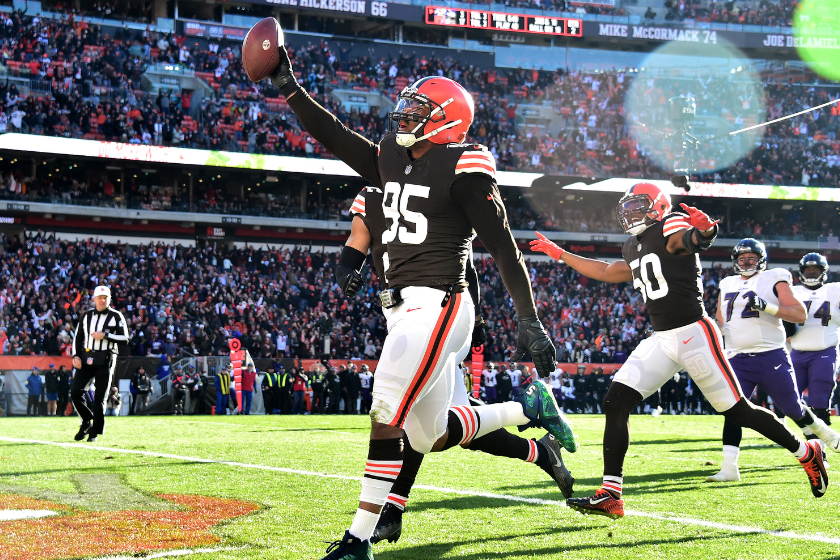 This bet just makes too much sense to me. Deshaun Watson will play only a handful of games, after the NFL upped his suspension. We do know that Jacoby Brissett might not lose you too many games but he certainly won't win you any. The Browns have one of the best offensive lines in football and a strong rushing attack, but in a division with the Ravens and Bengals they just don't have the firepower to go over .500 and hit this total.

Call me crazy, but I don't think this is the squad that can rise above the quarterback controversy it has been perpetually dealing with since the end of last season. Betting against the success of the Browns is a tried and true method of success. Who would I be if I didn't go to that well once again this season?

It's our first over bet of the column. The Ravens led the league as the most injured team in 2021. They have the highest-rated secondary in the league. Plus, Lamar Jackson should be incredibly motivated in the final year of his rookie deal. You are telling me that a former MVP has the opportunity to earn a contract that could be the size of an international arms deal if he performs at an elite level and wins double-digit games? Sounds like the type of motivation to bet on. He makes money, we make money. 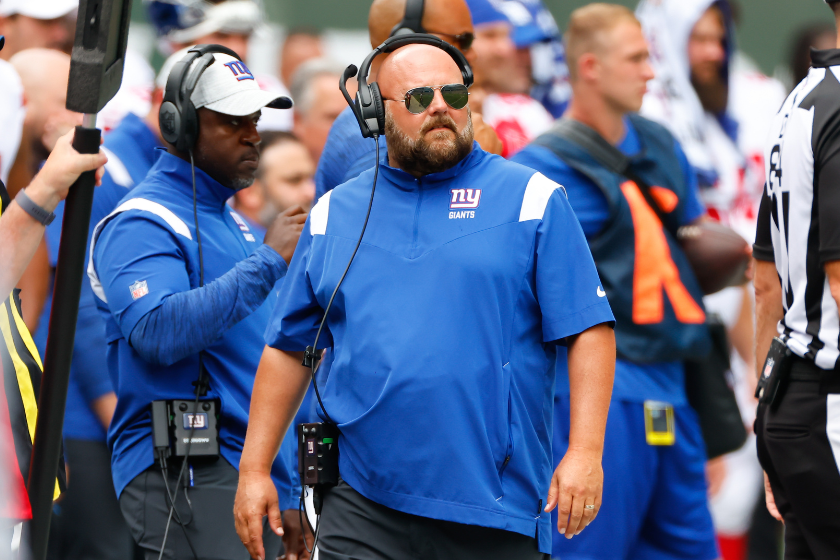 There seems to be a push that the Giants might be actually good. Everyone stop pushing. This is when we go back to the cardinal rule of future win totals: people don't want to believe bad things will happen so they don't properly account for them.

The Giants aren't there yet. Saquan Barkley is not a game-changing running back, and is now nearly 400 carries away from when he averaged 5 yards per rush in his rookie year. The Giants have the most expensive wide receiver room in the league despite being one of the least productive with only 5 receiving TDs last year. The prayer for Giants fans is that new coach Brian Daboll can do with Daniel Jones what he did with Josh Allen in Buffalo, but the reality is it took Allen two years to get to that elite level. The overhaul of the Giants offense isn't going to be finished this season and the defense isn't good enough to carry them to eight wins, they will be closer to five.

Another over we feel good about. The only reason this total is so low is because of the Raiders brutal schedule in the AFC West with six games against Kansas City, the LA Chargers and Russell Wilson and the Broncos. Don't overrate the impact of being in a tough division, there are enough games outside the AFC West that it is realistic all four teams could finish with 10 wins.

Plus, new coach Josh McDaniels is a perfect fit to improve the Raiders offense. Expect a superb output for Derek Carr and his plethora of weapons including Devonte Adams. This defense is built to play from ahead with a pass rush anchored by Maxx Crosby and Chandler Jones. Vegas is a playoff team which will be closer to 12 wins than eight.

Bets that we like so much, that when the season is over we'll either be crying from joy or pain because these are THE 2022 gold star bets of all futures bets 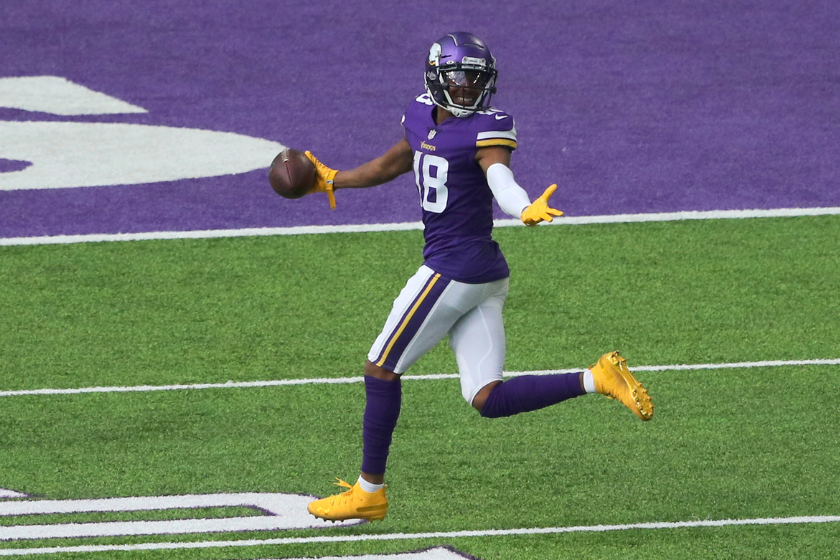 This is my favorite bet on the board. I just don't get it, everything about the Vikings screams they should have a down year.

First, let's talk about Kirk Cousins. Yes, his TD to INT rating is strong, but when it comes to winning he is 59-59 in his NFL career. The secondary is poor and aging with Pat Petterson and Harrison Smith past their prime. Dalvin Cook has had more than 249 carries each of the last three years, and it is unlikely his productivity can stay high with that touch rate.

New head coach Kevin O'Connell might be riding off the success of Sean McVay in Los Angeles, and I'm not a believer that we will see this passing attack reach new heights. This reminds me of how Adam Gase rode the Broncos Super Bowl to a flatline performance as coach of the Jets. The Vikings won eight games last year and should be trending down, but their win total is suddenly a game-and-a-half higher? The hottest part of this take is I think there is a real chance the Vikings might finish last in the NFC North behind both the Bears and Lions, nevermind them winning double digit games.

Here it is Steelers fans, the painful first year after you lose your Hall of Fame quarterback. The NFC North isn't going to be fun for Pittsburgh, with the Bengals coming off a Super Bowl run and loaded with talent. The Ravens should be back after a year plagued with injuries.

The Steelers are countering with Mitch Trubisky and rookie Kenny Pickett at QB. Plus, for all the success Mike Tomlin has had with this organization, I've never seen anything that makes me believe he is the type of coach that can make in-game adjustments to strategy to help change the course of a game. His strategy changes usually just seem like "play harder men", and I just don't think that is going to be enough.

This feels like another year of Najee Harris touching the ball 381 times for less than four yards a carry. Pittsburgh has the 28th ranked secondary in football and was incredibly fortunate to win as many games as they did last year. Loyal Steelers fans will likely be betting this win total up which is good for under betters like us because we are looking at a team that is more likely to have a top 5-7 pick in the draft, than eight wins at the end of the season. 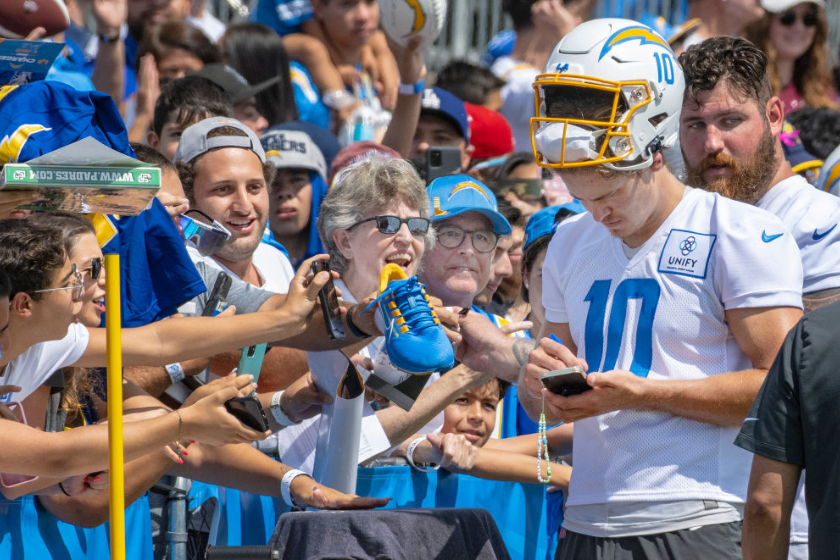 If there is some big vat of Chargers kool-aid, then please take my keys and over serve me.

This team has one of the best young quarterbacks in the game. Last year, Justin Herbert threw for 5,000 yards in just his second season and with an offseason without COVID-19 restrictions, I believe he is primed to break through to an even higher level. Los Angeles returns all the key parts of an elite offense, behind an improved offensive line. On defense, they signed a top of the market cornerback in J.C. Jackson to pair with last year's impressive rookie Asante Samuel Jr., not to mention adding Khalil Mack to take some of the attention off Joey Bosa.

After a crippling loss prevented them from making the playoffs last year, one hint of consistency (they gave up 41 points to the Texans last year) and the Chargers should have 11 wins wrapped up before Christmas. They have the roster and coaching staff to be in the conversation for a first-round playoff bye, despite playing in what is likely the most competitive division in football.

MORE: Darryl from "The Office" and the Worst Fantasy Football Trade Ever