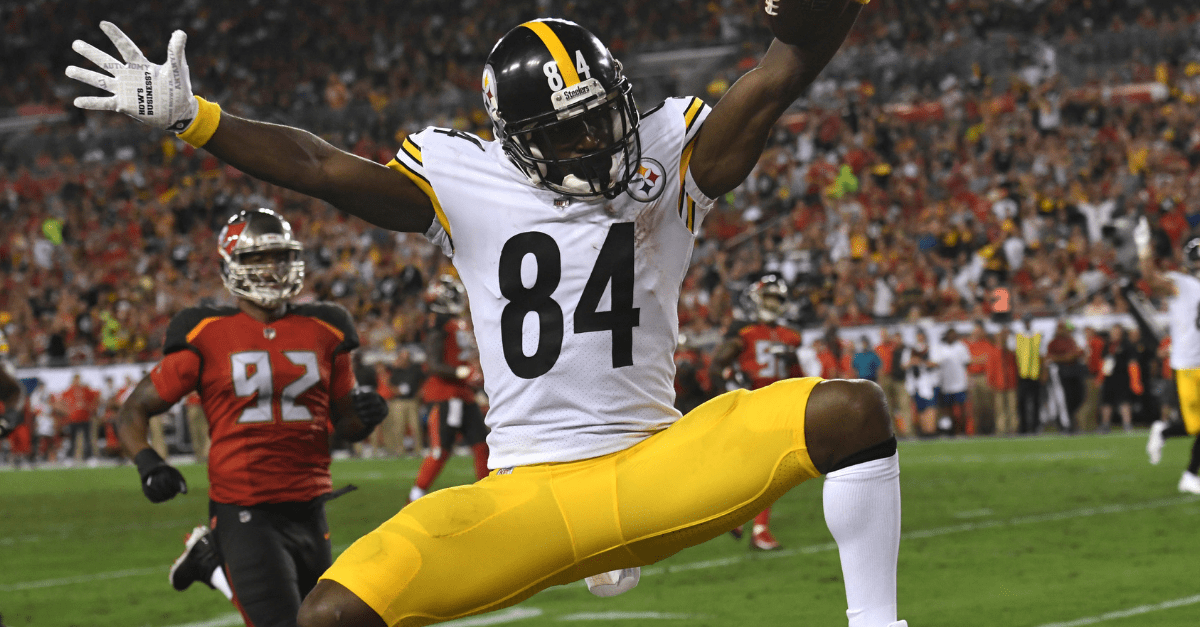 Despite picking up their second win of the season last week over the Atlanta Falcons, the Pittsburgh Steelers are still a complete mess. All-Pro running back Le’Veon Bell announced he would return to the team during their Week 7 bye, even though that’s two weeks before it would actually happen. Questions about head coach Mike Tomlin’s job and the terrible performance of their defense to start the season are everywhere, so why not add another piece of drama to the mix?

All-Pro wide receiver Antonio Brown was named in two lawsuits stemming from an incident at his Florida apartment in April. In them, the six-time Pro Bowl selection is accused of throwing furniture off of a 14th-floor balcony, which nearly hit and killed a two-year-old child. After being asked to vacate, Brown is accused of trashing the condo, leaving thousands of dollars in damages in his wake.

According to court documents obtained by KDKA-TV in Pittsburgh, police were called to The Mansions at Acqualina, just north of Miami, last April after the Steelers wide receiver returned to find that $80,000 and a 9mm handgun were stolen from a duffel bag in his condo.

After a verbal altercation with condominium security about why someone was let into his condo, Brown threw two large vases, a heavy ottoman and other furniture off the balcony towards the pool area 14 stories below in a tantrum during the alleged incident.

Police say Brown was “extremely agitated, acting aggressively, and yelling at security personnel” when they arrived.

Surveillance video shows several large objects falling within a few feet of Ophir Sternberg’s 22-month-old son walking near the apartment complex’s swimming pool. Sternberg says Brown isn’t being sued for his money, but for the emotional distress Brown’s actions inflicted on his son.

“Mr. Brown?s out-of-control and inexcusable behavior could have killed my son. His reckless tantrum displayed complete disregard for the safety of others. We intend to hold Mr. Brown accountable, to hopefully ensure that something like this never happens again.” — Statement from Ophir Sternberg

Breaking the condo rules as part of his lease agreement, Brown was asked to vacate the property immediately following the incident.

When the landlord later entered Brown’s unit, the place was trashed. Multiple pieces of high-end custom furniture were destroyed, multiple mirrors and doors were broken, the floors were damaged, and the scene was described like there had been “a real large college party in the unit.”

Attorney’s for the landlord estimate the extensive damages to the property at around $100,000.

I’ll say it. As a “consume-all-things-Steelers” city we helped build Antonio Brown up to be larger than life. We helped create this. That said, as his actions become increasingly bizarre, I think it’s OK to ask if he needs a hand; if he’s doing OK mental health wise.

Besides the fact that the Steelers, a preseason Super Bowl contender, have a 2-2-1 record to start the season, and Antonio Brown has been mostly contained through the team’s first five games, this just seems like another day for the drama-riddled Steelers.

They can’t seem to go a week without some kind of outside noise invading the locker room, and the questions stemming from these lawsuits only add fuel to the fire.

A lot of things are still uncertain, but both the Steelers and Antonio Brown have not commented publicly, and likely won’t, until this latest batch of trouble is resolved.