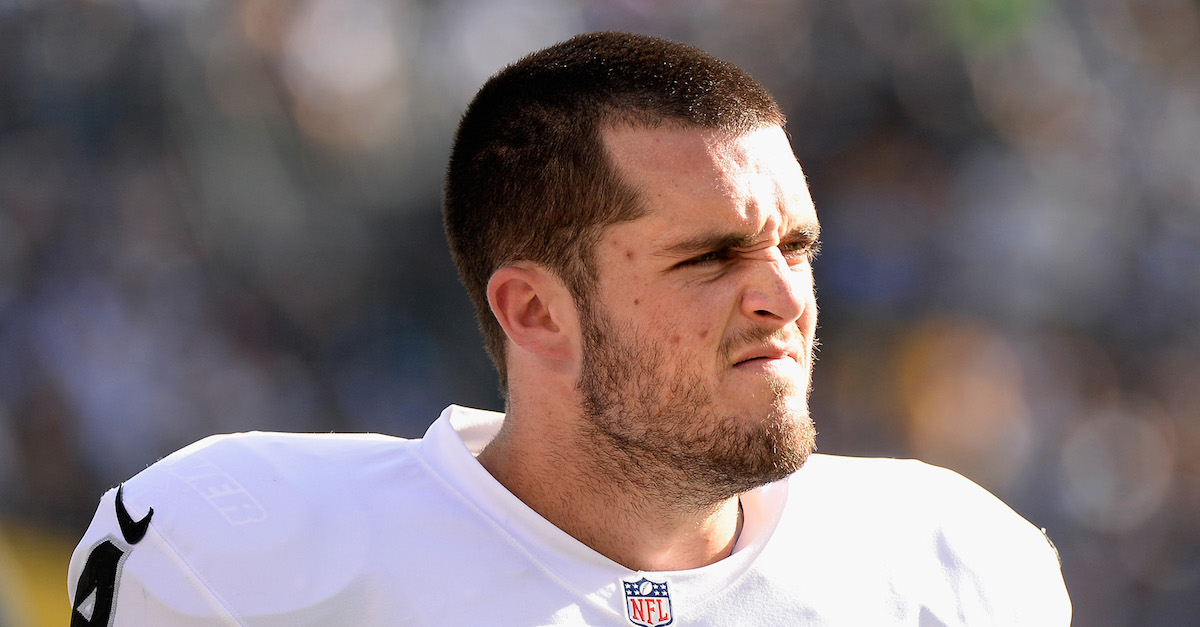 Harry How/Getty Images
SAN DIEGO, CA - NOVEMBER 16: Quarterback Derek Carr #4 of the Oakland Raiders reacts from the bench during the second half of the game against the San Diego Chargers at Qualcomm Stadium on November 16, 2014 in San Diego, California. (Photo by Harry How/Getty Images)

False stories are a way of life in professional sports, but for the good sports reporter, the tough part of the job is sniffing out the falsehoods and getting to the truth.

That’s especially true with locker room disputes or anything that happens outside of the white lines, but the latest report to come out of Denver, started by Miko Grimes, the wife of Tampa Bay Buccaneers cornerback Brent Grimes, is so outlandish that it didn’t take much to debunk it.

Grimes apparently believes that the injury Raiders’ quarterback Derek Carr suffered in early October against the Denver Broncos was no fluke. In fact, speaking on a New York radio station, she flat out said that Oakland’s offensive line had a plan to get Carr hurt — stemming from a dispute over national anthem protests a week before against the Washington Redskins.

Here’s the story, as passed on by the Kansas City Star:

?They were fighting in the locker room, and that?s the only all-black offensive line in the NFL is the Raiders,? Grimes said.

?So, they were in the locker room, and Derek Carr is a bible-thumper to the fullest. And so he was basically trying to force the players to read the bible before the game, and do all this stuff and they were like, ?No, no, no, that?s you.? And so he was so upset about it, when the whole offensive line was said they were going to kneel, he was like, ?No, you?re not kneeling. No, no. This is America, you?re going to stand for the flag.? And they got in a fight in the locker room, so when they came out to play, they basically had a plan.?

Of course, Grimes’ outlandish story was quickly called out, including by members of the Raiders’.

I also got a text from a Raiders offensive player "please don't ask me for a response to dumb stories. Derek is our guy" #Raiders

Russini did pass on a bit more inside information on what happened:

Told by several Raiders sources this claim is entirely false. "This couldn't be further from the truth" Here's how it was explained…

Raiders went to Washington D.C. and discussed as a team including the owner, head coach, and team leaders how they would handle the anthem

Raiders didn't know what to do. I'm told "Derek Carr never told his team to stand, sit, or kneel. He told them I respect your choice"

Finally, an offensive lineman did point out Derek Carr was injured the following Sunday in Denver, he held the ball too long and he knows it

And as if that wasn’t convincing enough, Scott winter, who covers the Raiders, passed on this report from in the locker room after the game in question.

I was there in that locker room after the DC game, and I can attest 100% to what Mr Penn is saying. Heard Zero about what she said.

The evidence seems to be completely against Mrs. Grimes’ story, and that’s not even considering the fact that she’s the wife of a Tampa Bay player, speaking on New York radio — about the Oakland Raiders.

It just doesn’t add up.