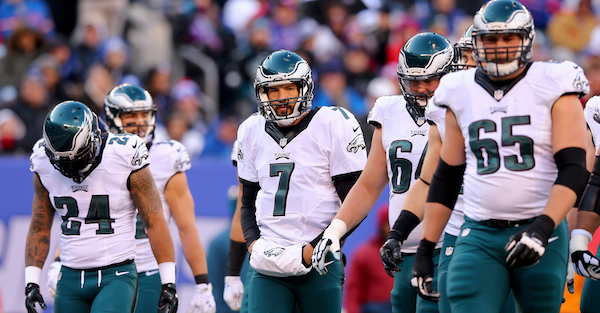 EAST RUTHERFORD, NJ - JANUARY 03: Sam Bradford #7 of the Philadelphia Eagles walks on the field with his teammates against the New York Giants during their game at MetLife Stadium on January 3, 2016 in East Rutherford, New Jersey. (Photo by Elsa/Getty Images)

The Philadelphia Eagles finished a dreadful regular season under Chip Kelly and hoped for a quick rebuild under new head coach Doug Pederson.

Much of that hope relies on Sam Bradford re-signing in Philly. After reportedly offering him even more money, the Eagles’ Plan B was laid out, per NFL.com:

“The other option appears to be signing Chase Daniel in free agency then potentially trading for Nick Foles.”

Daniel has started just two games over his six-year career and he wouldn’t appear fit to be the full-time starter for the Eagles.

While Bradford certainly didn’t have the best year (3,700 yards through the air for 19 touchdowns and 14 interceptions), Foles fell apart in St. Louis, tossing for 2,000 yards and just seven touchdowns to 10 interceptions.

The Eagles better hope this deal works out with Bradford.