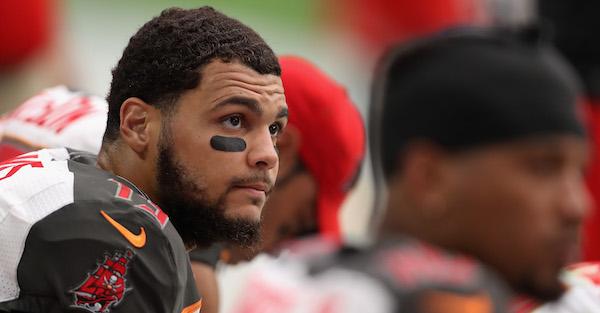 ESPN anchor Sage Steele took to Twitter Sunday night after Tampa Bay Buccaneers wideout Mike Evans announced he would sit for the national anthem over the rest of the season.

Hey @MikeEvans13_ look up definition of the word DEMOCRACY & remember this pic while kneeling/exercising your right to protest #perspective pic.twitter.com/kGruy3wEDe

Here?s what he said the day prior on why he was protesting, per JoeBucsFan.com:

Evans has every right to be upset about the result, but not doing anything to at least make his voice heard in the first place is unacceptable. He has truly no room to complain if he didn?t take advantage of voting.

In his third season, Evans has 745 yards receiving and eight touchdowns.

There has been plenty of controversy surrounding the national anthem protests, started by Kaepernick to take a stand against the oppression of ?black people and people of color.? Kaepernick originally sat and has moved to kneeling.