Former SEC/NFL ref tells a story about Peyton Manning that shows even in frustration, he’s as classy as they come 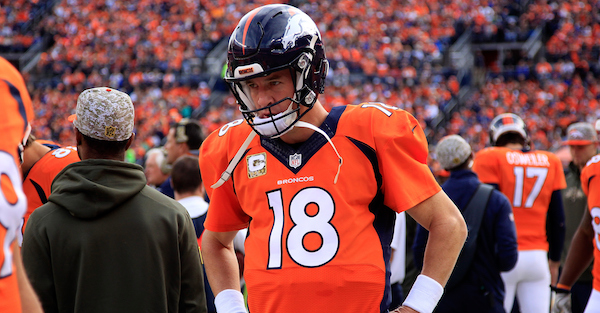 Peyton Manning has shown that he can be pretty funny with some stints on “Saturday Night Live” and it looks like one of his meaner characters came out to play one game when he was playing in Denver.  Chattanooga Times Free Press writer Mark Wiedmer told a story that came from longtime SEC and NFL referee Butch Hannah who saw Manning in both leagues and when Manning was in his second-to-last year of his career.

“Peyton’s next-to-last year, the Broncos were facing the Dolphins in Denver and the whole game was a struggle for them,” Hannah said. “I called back two Denver touchdowns. But they pulled it out by two or three points (39-36). But late in the game, the clock about to run out, Peyton mistimed a snap and they had to run one more play. Peyton said something off-color to me, which was not at all like him.

And that’s where most stories would end with both parties forgetting what happened and moving on. But that’s not Manning as he just couldn’t seem to let it go. Here’s the second half of that story:

A few weeks later, a FedEx package arrived at Hannah’s doorstep. Inside it was a letter originally sent to the NFL’s offices in New York City. The letter was from Manning.

“He said he wanted to apologize for his reaction to me that day against the Dolphins,” Hannah related. “Would I please accept his apology? That’s the only time that’s happened to me in all my years of officiating.”

Even then, the story didn’t end. A few months later, Hannah was about to umpire a preseason game between the Broncos and Seahawks in Seattle. He felt someone put an arm around his shoulder.

“It’s Peyton,” said Hannah, who’s known Manning since both were in the SEC in the mid-1990s. “He asks me, ‘Did you get my card?’ I said, ‘Peyton, you’ve got to let this go.’ He says, ‘You have no idea how upset I was with myself.’ That’s the kind of son Archie and Olivia raised. Pretty impressive.”

Talk about being humbled and trying to make things right after a transgression. We don’t know exactly what Manning said to Hannah that day, but it must have been pretty bad — or at least by Manning’s standards — to warrant sending a letter and FedEx package to the ref’s house.