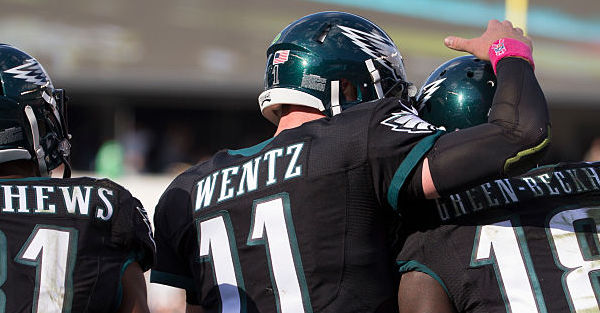 Mitchell Leff/Getty Images
PHILADELPHIA, PA - OCTOBER 23: Jordan Matthews #81, Carson Wentz #11, and Dorial Green-Beckham #18 of the Philadelphia Eagles celebrate after a touchdown in the third quarter against the Minnesota Vikings at Lincoln Financial Field on October 23, 2016 in Philadelphia, Pennsylvania. The Eagles defeated the Vikings 21-10. (Photo by Mitchell Leff/Getty Images)

Dorial Green-Beckham has had a very up-and-down career in the NFL thus far, and it looks like that may continue according to Philly.com’s Jeff McLane.

With the additions of Torrey Smith and Alshon Jefferey, the Philadelphia Eagles are in a situation where they can cut bait with other receivers on the roster this offseason, and it wouldn’t surprise McLane if Green-Beckham is one of them.

“If you were to map out the final cuts for the Eagles? 2017 roster right now, Agohlor, Green-Beckham and Turner might not make the team.”

Nelson Agohlor has had a disastrous NFL career thus far, so his release wouldn’t be huge, but moving on from him and Green-Beckham would be a huge change for Philly’s wide receiving core heading into the 2017 NFL season.

“Neither has Green-Beckham, although he has the size. But that length hasn?t helped him much as a receiver. It?s difficult to see Green-Beckham making the cut. While Agholor still carries a salary-cap hit ($2,557,465) for 2017, Green-Beckham would cost the Eagles nothing if released.”

Unfortunately Green-Beckham, it is more financially for the Eagles to move on from Agholor than the former this offseason, which is a major factor in decisions like this.

Still, the Eagles may not cut either wide receiver this summer, but it certainly sounds like it’s a real possibility.