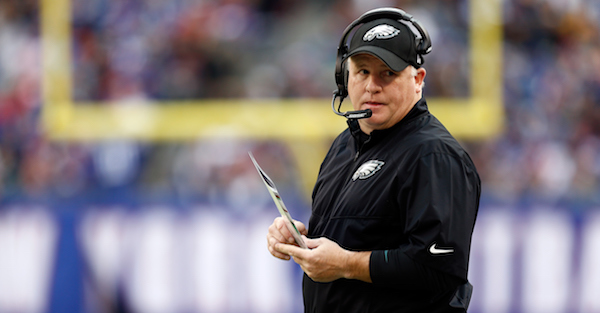 If Philadelphia Eagles fans weren’t thrilled with Chip Kelly before, they might be even more irked after they hear what the former head coach offered the Tennessee Titans at last year’s NFL Draft.

Tennessee held the No. 2 overall pick and was in line to draft former Oregon quarterback Marcus Mariota. Mariota played under Kelly at Oregon. Kelly wanted Mariota in Philly.

After deconstructing a playoff team in Philadelphia, the Eagles head coach then wanted to reportedly trade the following, per Fox Sports? Peter Schrader, via Deadspin:

For a quarterback that you had no real idea if he would pan out or not, that’s right up there with a Robert Griffin III-type offer. Mariota was solid in Year 1, but in Philly, with a similarly bad offense, who knows how the offense would have panned out.

Kelly, of course, was fired last season and now holds the clipboard in San Francisco, where he’ll try to put the pieces back together with (or without) Colin Kaepernick and the 49ers.