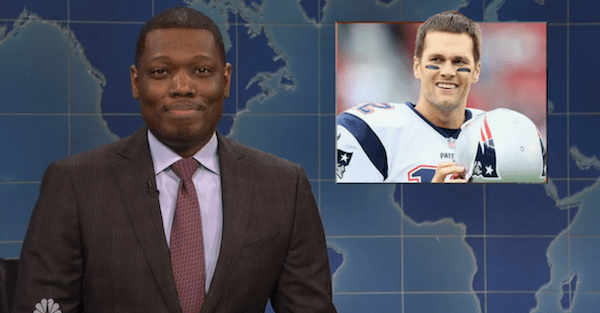 Plenty of comedic material has been available for Saturday Night Live thanks to DeflateGate and Donald Trump, and Weekend Update co-anchor Michael Che found a way to intertwine the two.

During the beginning of SNL’s Weekend Update, Che brought up the Russian election hacking news. He then compared it to Tom Brady’s role in DeflateGate.

“[Obama] also accused Donald Trump of knowing it was happening while doing nothing about it, but I mean, can you really blame him? Who snitches when somebody cheats for them? That?s just ungrateful. You don?t expect Tom Brady to tell the ref, ?hey, let me try that touchdown pass again, the ball was deflated.? I guess Donald Trump was just acting like a patriot.?

It was a really funny bit from Che, especially considering Brady’s ties to Trump.