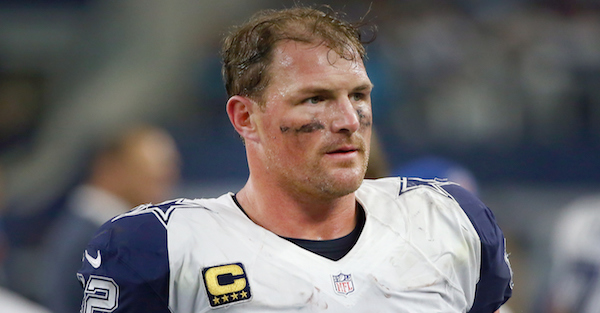 With the NFL season ending for most players, many veteran talents will begin to announce their intentions in regard to what is next for their careers. For Dallas Cowboys tight end Jason Witten, he made quick work of silencing some rumors that would have hastily sprung had he not gone on the record.

To put it more bluntly: One of the greatest players to ever suit up for the Cowboys has made it official. He will be returning for at least one more season in Dallas.

“Oh, I’m back,” Witten said after Dallas beat the Philadelphia Eagles on Sunday. “I’m coming back. I love playing this game too much and I know that I can play it at a high level.”

Witten, 35-years-old, actually signed a four-year extension with the franchise back in March.

“I know this: The burn is strong inside me to play at a high level and to be a part of one of these groups of guys and one of the leaders to see this thing through and go try to compete for a championship,” Witten said. “When I wake up tomorrow, that’s where my focus will be on as I move forward. It hurts because you don’t get a whole lot more opportunities at this and I realize that, but rest assured that I’m going to do everything in my power to help us be better as we move forward. And I think it needs to be clear that it starts with yourself.”

Generally speaking, veterans often lean toward retirement during the aftermath of a harsh season. Bodies need time to recover, and it physically hurts most right after the season ends. While Witten has time to change his mind if he inevitably deems it necessary, the timing of the reveal certainly makes one believe he is sincere with his sentiment regarding his return.