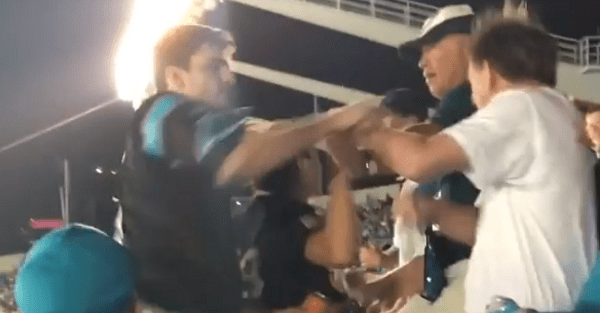 The Carolina Panthers suffered a hard-fought 28-23 home loss to the Philadelphia Eagles on Thursday evening and the entire country was able to see it. That is, of course, the nature of a nationally televised contest in prime time, but while the vast majority of fans likely handled things as well as could be expected, one fan in Charlotte absolutely did not.

In short, the fan decided it would be a good idea to sucker punch a defenseless older man in the stands at Bank of America Stadium and it was captured on video. (h/t Crossing Broad)

#dudebro & his chicka were standing for the entire game. words gradually got more and more escalated. there previously was a single mom and her son between us, they left halfway through the 3rd. after that, the lid was off. the dude took offense to the couple never sitting down and obstructing his view. the victim telling the #dudebro how they’re being jerks and how rude they are for not sitting. the #dudebro turns around and calls the victim a “geriatric f—k”, “fa***t”, and “hick”. then sucker punches him right in the face. i don’t know if he got away or left in handcuffs, but i hope it’s the latter. edit: to clarify further, both the puncher and punchee were wearing Panthers attire. The assailant was seated in section 541, row 24, seat 10.

As you can see, it was absolutely brutal and apparently accompanied by wildly inappropriate language as well. The video is making the rounds on Friday, and with good reason, to the point that the NFL is now in contact with the Panthers, per Ian Rapoport.

.@NFL says it’s in contact with #Panthers security regarding that punch shown by @CrossingBroad.” “We take all of these very seriously”

This is completely unacceptable behavior and, frankly, assault. In short, this fan may not be able to return to that particular venue and that, at a bare minimum, would be the right outcome.