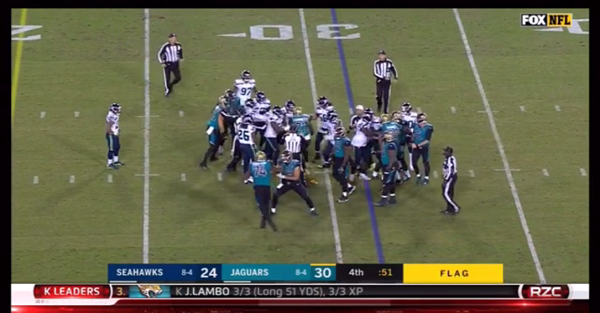 The NFL had a huge blemish it had to deal with on Sunday as the Jacksonville Jaguars and Seattle Seahawks got into a skirmish at the end of their game. It would appear that despite an obvious need for some suspensions or some sort of other discipline, the league won’t be taking any action against them.

From the #Aftermath: Players for the #Jaguars and #Seahawks won’t be suspended for their late-game actions, but the league is reviewing Bennett, Jefferson, Richardson, Fournette and others. pic.twitter.com/OMf3Bf5pKK

Several Seahawks players were ejected from the game and one of the ejections came after Quinton Jefferson tried to fight a fan in the stands who threw a drink at him. Here’s video of the incident:

Defensive tackle Sheldon Richardson of the Seahawks was ejected for throwing a punch at Jaguars running back Leonard Fournette. Fournette was defending his center in Brandon Linder who’s knees took a shot from Bennett when he dove at Linder and now the league will have to review exactly what happened as NFL Network’s Ian Rapoport said in the video above.