Super Bowl LV was a snoozer, but viewers were gifted with one single play that stopped our hearts and made us cheer louder than we did at any point in the game: A STREAKER!

While a 43-year-old Tom Brady and the Tampa Bay Buccaneers were busy picking apart Patrick Mahomes and the Kansas City Chiefs on Super Bowl Sunday in Tampa, Florida, one crazy fan in a hot pink man-kini spiced up the game and ran for more yards than any Chiefs player.

Millions of fans instantly wondered who the heck this dude was and why was he streaking during the Super Bowl? We now know the answers.

(Warning: These videos and social media posts include NSFW content.)

Check out the close-up of the streaker last night at the #SuperBowl #Epic #Hilarious pic.twitter.com/R7JvIAy1Zc

We have a STREAKER!!!

The spin move was electric! pic.twitter.com/60Qvrc8NgP

The #SuperBowl streaker has more yards than the Chiefs tonight ? pic.twitter.com/6JMeGNSEMR

With about five minutes to go in the fourth quarter, a man ran onto the field wearing a backside-revealing hot pink, um, outfit. The Chiefs had the ball and were down 31-9 at that point, so the game was essentially over.

Viewers at home caught a glimpse of the fan running by both the Chiefs and Bucs on the CBS broadcast. The cameras quickly cut away from the streaking fan, because he could expose himself at any moment.

The streaker, who was holding a mask (how fitting for a pandemic season) in his hand, sprinted around the field at Raymond James Stadium. He evaded two security guards with a nifty spin move before sliding at the 3-yard line and into the goal line of the end zone while being tackled by field personnel. He then received a massive ovation for bringing life to the game.

The best call of the night wasn't anything Jim Nantz or Tony Romo said. It was from sports announcer Kevin Harlan, who gave us an incredible play-by-play of the streaker:

Kevin Harlan's call of the idiot on the field (w/video from @rlacey23) : pic.twitter.com/iAI7WDi5xx

"Pull up your pants, take off your bra and be a man," Harlan said during the electric 46-second clip.

Screw anything The Weeknd sang in the Halftime Show, this was the greatest moment of the night.

But just who the heck is our infamous streaker?

Who Is The Super Bowl LV Streaker? 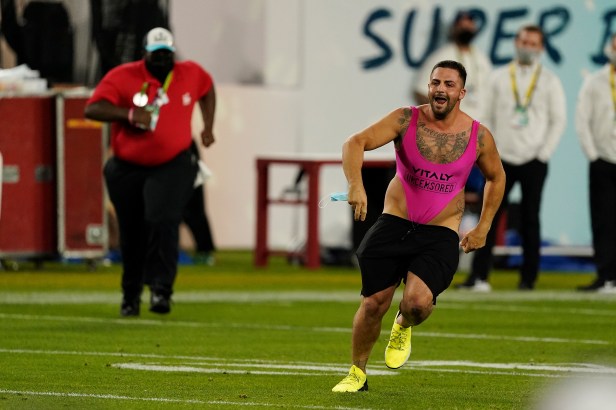 The Super Bowl LV streaker was identified by local news outlets as Yuri Andrade, a 31-year-old Florida resident who is reportedly from Boca Raton.

The tattooed, pink swimsuit-wearing Andrade posted multiple photos of his actions on his Instagram profile.

Why Did He Streak?

We fucking did it ? pic.twitter.com/xZ3cGMxCwO

Andrade's pink thong suit contained the words, "Vitaly Uncensored." The man who seems to be behind that phrase and the streaker's actions is Vitaly Zdorovetskiy, the YouTube star with 10 million subscribers who got famous off prank videos and started an x-rated website.

"We f**king did it," Zdorovetskiy wrote on Twitter after Andrade stole the show.

This isn't the first time the prankster and social media wizard has been behind a streaker at a sporting event. He's even ran onto courts and fields himself to gain publicity.

In 2016, he ran on to the court in an NBA Finals game with the words "Trump Sucks" on his chest and "LeBron 4 President" on his back and documented the experience on YouTube.

In 2017, he did the same at the Major League Baseball World Series. He's been arrested and jails on numerous occasions, and even once spent five days in jail for climbing the Pyramids of Giza last year.

Zdorovetskiy was also behind streaker and Instagram influencer Kinsey Wolanski's stunt at the 2019 Champions League final. She wore a leotard that said "Vitaly Uncensored" and made an estimated $4.7 million from it.

It appears streaking pays off, because Zdorovetskiy is worth an estimated $7 million, per Celebrity Net Worth.

Andrade appears to be a friend or co-worker of Zdorovetskiy's, according to his Instagram profile.

Did He Win a Prop Bet?

Talk about betting on yourself.

Andrade is seemingly claiming on his Instagram account that he won $374,000 after betting $50,000 on a prop bet that a streaker would run wild at the Super Bowl. Clearly, he took matters into his own hands.

Rumors began taking social media by storm on Monday about this. One picture with a text message claims Andrade told a man at a restaurant prior to his act what his plan was. It even mentions that his "buddy" ran out first as a diversion. According to the Tampa Bay Times, a second man did in fact run out on the field.

"A second man, 28-year-old Douglas Charles Schaffer Jr., also of Boca Raton, was also arrested and charged with trespassing after he jumped the stands and ran onto the field, according to an arrest report with wording that's identical to Andrade's," the Tampa Bay Times reported.

So, is this story true?

Syracuse.com dug in and found that it's probably false. No sports book would ever allow such a hefty wager on a prop bet.

"No book in their right mind would take $50K limits on that. Nowhere close," Covers.com reporter Patrick Everson told Syracuse.com. "If there was one, I'd have been right there next to him in a pink tutu."

What Happened to Him?

Andrade was charged Sunday night with misdemeanor trespassing for streaking during the game.

According to WFLA.com, the Hillsborough County arrest database showed he posted a $500 bond and was released Monday before 8 a.m. ET.

Streaking at sporting events can be costly.

Some crazy fans have been barred for life from the venue they streaked at. Exposing yourself in some states can lead to an indecent exposure conviction, which requires you to be register as a sex offender. Yikes! 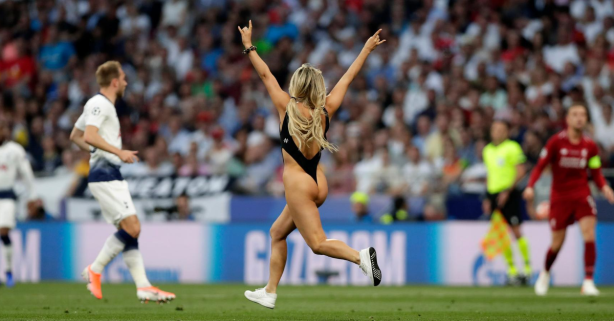 This is the second Super Bowl in a row that featured a streaker.

The video speaks for itself:

A gem from the KHOU Sports vault, the streaker at Super Bowl 38! Something you didn't see on TV...the best part, at the end! pic.twitter.com/tVdFpQiKlD

Super Bowl LV might not have lived up the hype we hoped for. Surefire future Hall of Fame member Tom Brady threw two touchdowns to Rob Gronkowski and won MVP in the Super Bowl win, plus he got to go home to wife Gisele Bundchen.

Amanda Gorman delivered an epic poem and Eric Church also teamed up with Jazmine Sullivan for an amazing national anthem.

But the Super Bowl streaker will go down in history.

MORE: Streaker's 15 Seconds of Fame Made Her an Instant Millionaire