Teams reportedly attempting to bring 6-time Pro Bowler out of retirement, including one playoff contender 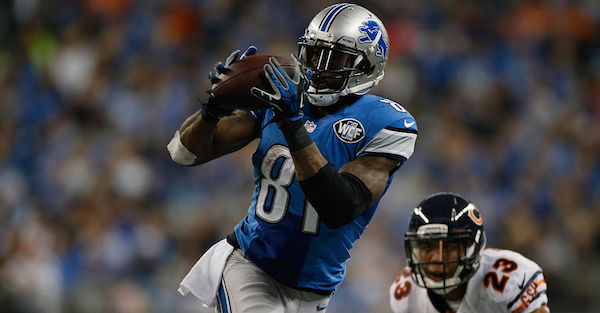 Megatron might be looking to forge a comeback pretty soon.

No, that isn’t a cue for Shia LaBeouf or Mark Wahlberg to show up and start trying to protect the planet ? pretty sure we’ve seen the last of Sam Witwicky anyway. But it is an interesting development with the NFL trade deadline set for Tuesday afternoon.

Calvin Johnson may be still be retired, as of now, but there is a growing list of suitors hoping to lure him back to the gridiron.

According to ESPN, multiple teams have approached the Detroit Lions about trying to acquire Johnson’s rights. And one of those teams is the Philadelphia Eagles, who have a budding young superstar quarterback in Carson Wentz.

#Eagles in pursuit of another weapon for #Wentz…hearing they are aggressively pursuing the rights for Calvin Johnson. #Megatron #GC

The six-time Pro Bowler hasn’t played since 2015 and has been pretty adamant about not coming out of retirement.

But Marshawn Lynch was also sure that he didn’t want to play football again. Now, Beast Mode is back with his hometown Oakland Raiders.

Crazy things happen all the time. Guys change their minds all the time. Ask Brett Favre about how difficult it is to stay away from football.

If the Eagles can acquire the rights to Johnson, maybe they can convince him to help them make a run at the Super Bowl.

But, as we now know, Philadelphia isn’t the only team trying to swing that deal. Things are going to get interesting between now and Tuesday.