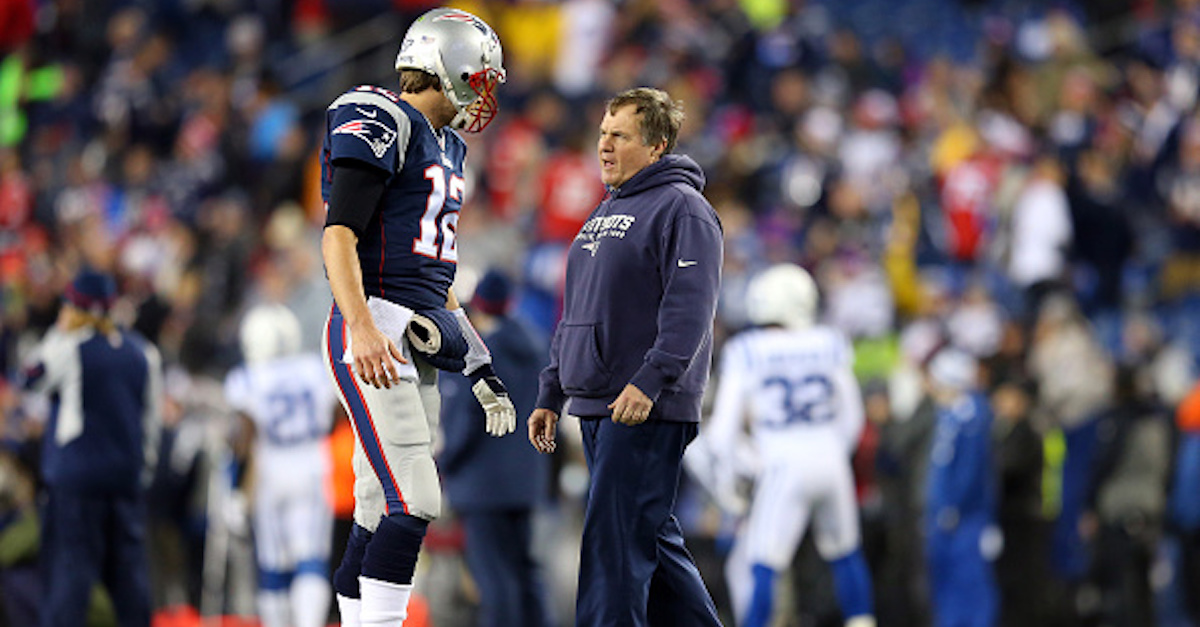 The New England Patriots are the top seed in the AFC at 13-3, and they’re the favorites to win the Super Bowl yet again.

Tom Brady and Bill Belichick are searching for their sixth Super Bowl together, but a recent story from ESPN’s Seth Wickersham indicates that the relationship between the two is strained and could be beyond repair.

Wickersham reported that there has been a power struggle between Brady, Belichick and owner Robert Kraft. He said that Brady went over Belichick’s head and told Kraft to trade Jimmy Garoppolo.

The story indicates that Belichick wasn’t pleased about trading Garoppolo, and that Brady was excited after the trade was made because he felt like the team was his again.

The article claims that the rift is so severe many Patriots feel this is the last year together for the trio. Also that Brady went to Kraft to force Belichick to trade Jimmy G. ESPN is planning a full day of promotion tomorrow for the article and its author @SethWickersham

Related: Bill Belichick isn?t even allowing the insane ?bomb cyclone? to be an excuse to miss Patriots practice

There has also reportedly been a rift between Belichick and Brady revolving around Brady’s personal trainer, Alex Guerrero. Belichick banned Guerrero from the sidelines and from team flights, and he also doesn’t want other Patriots outside of Brady to visit Guerrero.

Here’s Wickersham’s story in its entirety:

For almost two decades, Bill Belichick has managed to subvert the egos of his best player, his boss, and himself for the good of the team, yielding historic results. This year, though, the dynamics have been different. My story: https://t.co/H1In1GsQht

The Patriots have a first-round bye, and Belichick will likely deny Wickersham’s report. The Pats organization is tightlipped about any drama, so fans probably won’t hear much of anything but denial from Brady and Belichick.

And if the Patriots win another Super Bowl, the story will be swept under the rug and forgotten within a month. But if New England loses and Brady has a pedestrian performance, it will only increase the speculation that there’s a rift between the greatest coach and greatest quarterback of all time.

Belichick has always cut ties with players a year too soon rather than a year too late, but no one thought he would do that with Brady. The emergence of Garoppolo led many to believe that Belichick had a succession plan in mind for Brady, but Brady continued to play at a high level and led the franchise to a fifth Super Bowl last season.

Now, Brian Hoyer is Brady’s backup, and the Patriots have traded away both quarterbacks they drafted in recent years in Garoppolo and Jacoby Brissett. Brady is 40, and not many quarterbacks have played at a high level into their 40s. But he is also likely going to win the MVP, and if the Pats are playing for another Lombardi Trophy in February, we probably won’t hear much about any drama between Brady and Belichick.