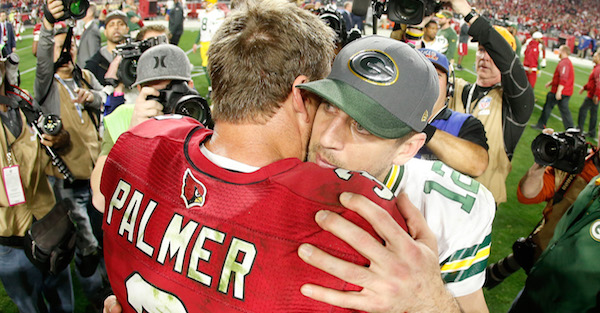 Arizona Cardinals teammates Carson Palmer and Larry Fitzgerald may walk away from the game for good, per NFL.com.

After 13 years in the NFL, Palmer’s NFL status is reportedly up in the air. That hasn’t stopped many from speculating, per Ian Rapoport’s note:

“One prominent general manager believes, from watching Palmer this year, that he has played his last down.”

While Palmer’s departure would be expected to force Fitzgerald’s hand in retiring the standout wideout, the inverse is not believed to be the same. That should be the silver lining if Palmer really is considering staying in the NFL, as Fitzgerald reportedly was telling people around the league this year would be his last.

Although reports note Fitzgerald seems the more likely to bounce, Palmer’s age (37) and the coaching staff future puts his future into question.

The team’s quarterbacks coach is reportedly moving to coach running backs, and Byron Leftwich will be brought in to coach quarterbacks.

In four playoff games, Palmer has tossed five touchdowns to seven interceptions and won just one game. After arguably his most trying season since leaving the Oakland Raiders, it shouldn’t be a surprise for Palmer to step away.

Fitzgerald on the other hand would be stepped away at the top of his game. He recorded his second consecutive 100-reception, 1,000-yard season (his third and fourth respectively of his 13-year career).