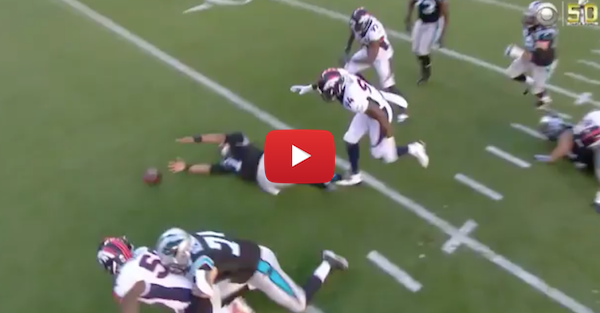 It’s been only a week since the Denver Broncos held off the Carolina Panthers to win Super Bowl 50, 24-10.

And while the Panthers certainly had plenty of opportunities to overcome the late deficit, one play stands out above the others as a questionable missed call, via MMQB.com:

The play came in the middle of the first quarter, with Denver already up three. Von Miller came around the edge, popped the ball out and the Broncos recovered inside the five-yard line.

According to the report, Miller could have been called for an illegal bat, when he swatted the ball toward the goal line after knocking it out of Newton’s hands.

?I thought Cam was going to jump on it, but I guess, I mean, he didn?t want to dive down there on it. I couldn?t fall on it, so I was just trying to, I don?t know, get it to one of our guys,? Miller said, via the report.

If Miller had been called for an illegal bat, the possession would have gone back to Carolina. Instead, no call was made the Broncos would score to go up 10-0 early.