Mickie James is by far one of the top women's professional wrestlers of all time. She began as Trish Stratus' biggest fan and wound up defeating her in the ring for her first WWE Women's Championship in 2005.

Over her eight-year career with World Wrestling Entertainment, the "peppy, energetic sweetheart" went on to win five more WWE Women's and WWE Divas Championships. The talented wrestler became one of the most recognizable and feared American professional wrestlers of all time next to names like Trish Stratus, Torrie Wilson, Stacy Keibler, Chyna and Lana.

To the delight of fans, she returned to the WWE Universe in 2017 on a three-year contract at 37 years old and proved she could still deliver a big ass whooping. To date, no female wrestler in WWE Raw's 25-year history has competed in more matches than Mickie James' 164.

Though a torn ACL in 2019 may have put her wrestling career on the shelf for good, James has kept herself occupied in many ways. She has a family and even a country music career.

Mickie James grew up in Montpelier, Virginia, and developed a love for horses when she was a little girl. Her parents are Stuart James and Sandra Knuckles, and James is part Native American of the Powhatan tribe.

James got into professional wrestling in the late 1990s. She debuted professionally on the independent circuit in 1999 under the ring name Alexis Laree. She went by Alexis when she was a dancer and Laree is her middle name.

Alexis Laree became Mickie James in the ring when she was introduced in a gimmick as Trish Stratus' biggest, most-obsessed fan in an episode of Raw. That iconic storyline -- which included an under-the-mistletoe kiss -- continued into a championship pay-per-view match against Stratus, which James fell short in.

Eventually, James defeated Stratus at Wrestlemania 22 in 2006 to earn her first Women's Championship. James became such an accomplished wrestler by this time that she actually dislocated Stratus' shoulder when she tossed her out of the ring. You can watch the full video here.

RELATED: Trish Stratus Is Still a Bombshell at 44 Years Old

Mickie James isn't the only female wrestler that has stripped down for a publication. Torrie Wilson, Sable and Lana are just a few others to bare all for some extra money.

James actually posed naked before she hit it big time in wrestling. When she wasn't making great money on the independent circuit, she was working at Olive Garden as a waitress to help boost her income.

She left little to the imagination when she posed for Leg Show magazine in 2000 and Naughty Neighbors magazine in 2001 in what can only be described as less of Playboy-model-type shoot and more of a Hustler-pornstar-type nudity photoshoot.

James, however, doesn't exactly seem proud of that now that she has a child. Maybe she's hoping people forgot about the Mickie James nude photos that are accessible with one quick Google search.

"Well... you know what? It's kind of hard to say, I've done some things in my past but that doesn't make me who I am today," she told The Morning After radio show in St. Louis in 2008.

How Old Is Mickie James?

The wrestling celeb clearly hasn't let age slow her down from doing the things she wants to do. She's wrestled for WWE as recently as 2019 and had a kid in 2014.

Still, James has a body fit for a bikini just like she did 15 years ago.

What Is Mickie James Doing Now? 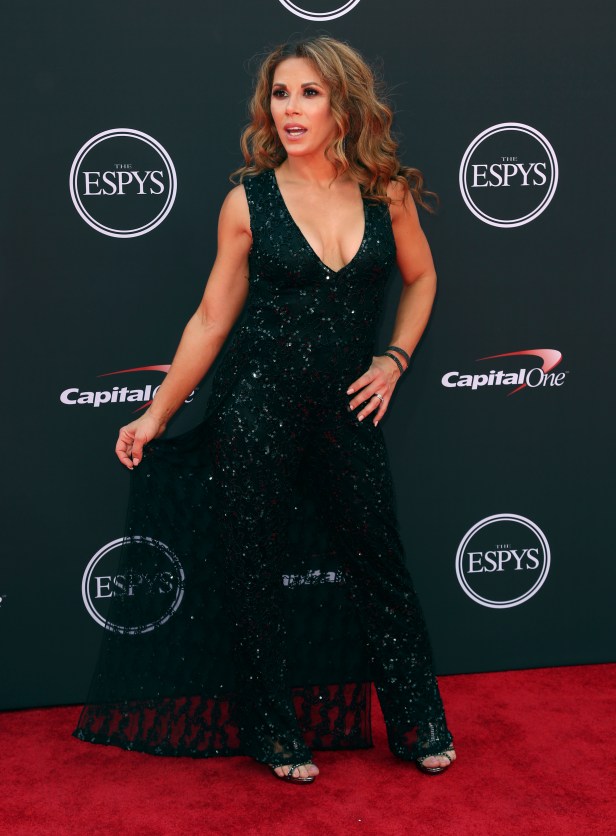 Fans who may think of her as "WWE Mickie James" may want to switch that to "Country Music Star Mickie James." After growing up playing violin, she couldn't stay away from music.

James released her first country music album, Strangers & Angels, as well as a single, "Hardcore Country", in 2010. She used the latter in her TNA entrance and made a music video for it. In 2013, she released her second album, Somebody's Gonna Pay. A song under the same name accompanied a video that featured Stratus and James' husband, Magnus.

"I just write from personal experiences or experiences of people around me. It wasn't until I was on the road full time with WWE and driving a lot at night that I started writing," she told Cowboys & Indians magazine. "I would put on the radio and sing and then write. I realized I was writing to the cadence of the music. I'd always wanted to sing when I was a little girl, but I didn't have the confidence to get up in front of people. As a kid I so fearful and doubtful of myself, but even then I had the desire to sing."

James is still recording music. She's opened shows for acts like Gretchen Wilson and Rascal Flatts and performed at the 2011 CMA Music Festival.

James' most recent releases were "I Don't Give A," "Great Minds" and "Christmas Presence" all in 2019. You can view more music videos and related videos on her Youtube channel.

James calls Richmond, Virginia, her home. She plans on moving to Nashville to enhance her country music career.

She became Mickie Laree James-Aldis when she married professional wrestler Magnus, whose real name is Nick Aldis, in 2015. The two also gave birth to their son, Donovan, in September 2014.

James loves being a mother, and she's been able to spend plenty of time with her son.

"I've been enjoying being able to get projects around the house done. I'm rebuilding a barn at my mom's for her horse. And I make about three train track sets for my son a day. Donovan is 5 and he loves trains! I've been working out every day, cooking, just spending family time," she told Cowboys & Indians in 2020.

James may get back in the ring one day, but for now she's enjoying motherhood and writing songs. Even at 40, she's still proving every day that age is just a number.

MORE: Stacy Keibler Is Still "The Weapon of Mass Seduction" at 40 Years Old