Stacey Keibler was never supposed to be a WWE Diva, and yet she ended up being one of the more famous women to ever grace the ring. The one-time NFL cheerleader for the Baltimore Ravens auditioned for a World Champion Wrestling Nitro Girl competition for the first time in the late 1990s and won it, kicking off her career.

Keibler became renown for her 42-inch legs and incredible physique. When she walked out to her WWE theme song, Kid Rock's "Legs", she sure knew how to use those limbs to excite a crowd. Her patented entrance into the ring is still engrained in wrestling fans' minds today.

Keibler took part in many memorable matches, like the tag team Bra & Panties match featuring her, Torrie Wilson, Trish Stratus and Lita. The long-legged bombshell's rivalry with Trish is still one of the greatest between any two WWE Divas.

The gorgeous Keibler retired from WWE in 2005 and pursued other ventures, such as when she appeared on the second season of "Dancing with the Stars" in 2006. It was there that judge Bruno Tonioli dubbed her "The Weapon of Mass Seduction."

These days, Keibler isn't quite the knockout she was back then. But at 41, she's still quite the looker.

Keibler grew into prominence for the WCW, where she was known Miss Hancock.

When Vince McMahon purchased the organization in 2001, she became part of the World Wrestling Federation. On June 14, 2001, she made her debut on SmackDown! as a heel character used to distract Rhyno.

From there, Keibler became a household name and wrestling superstar. She managed The Dudley Boyz and was deemed the "Duchess of Dudleyville." She danced on Vince McMahon's desk. Fans couldn't wait for her to strip down and show her assets in the ring. The professional wrestler feuded with names like Trish Stratus, Molly Holly and Torrie Wilson, though she wasn't the technical wrestler as the former.

Keibler officially retired from the WWE in 2006 to try her hand at acting and dancing. She made appearances since, though. She made a guest appearance on the WWE reality show Tough Enough and in 2019 delighted WWE fans when she inducted Torrie Wilson into the WWE Hall of Fame.

How Old Is Stacy Keibler?

She was born in Rosedale, Maryland, where she grew up interested in ballet and tap dancing. In 1990, the charming woman won Miss Maryland Pre-Teen and won the national competition.

She graduated from Towson University with a degree in mass communication, and by the time she was 18, was performing as a Baltimore Ravens cheerleader. 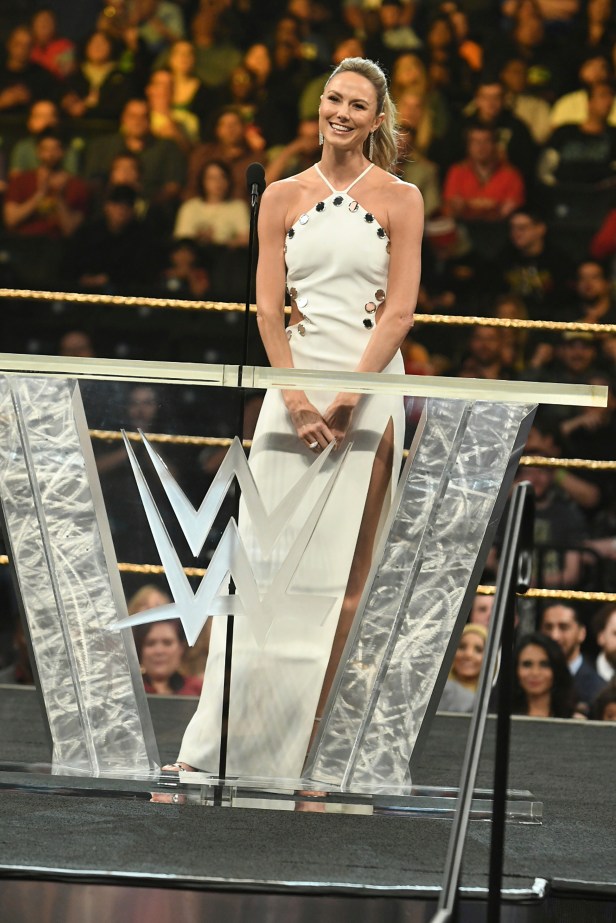 RELATED: Hulk Hogan's Daughter Looks Better Than Ever These Days

She may have turned the big 4-0 pretty recently, but she's still just as beautiful as ever.

Keibler proved age is nothing but a number when she inducted Torrie Wilson into the WWE Hall of Fame in 2019 in New York City. To be honest, the two looked better in their 40s than some of the WWE's Divas in the ring today look.

After wrestling, Keibler immediately appeared on ABC's "Dancing With the Stars" in 2006. She finished in third place. The blonde-haired dazzler then began acting. She earned small roles in TV shows like What About Brian,  How I Met Your Mother, Psych, George Lopez and Blue Mountain State. In 2013, she hosted a Lifetime show called Supermarket Superstar.

Since then, she launched a lifestyle blog that failed to gain much of a following. She found herself entrenched in drama in 2016 when her husband Jared Pobre sued NFL quarterback Cam Newton, accusing him of damaging his $11 million Beverly Hills home that Newton had leased.

Now, Keibler is focused on being a full-time mom to her three children. She and her husband also co-founded a skincare company, Caldera + Lab, so it's safe to say their hands are full.

Who Is She Married To?

All eyes were on Keibler when she made her way to the ring back in the day, so it's no surprise she's dated some high profile dudes.

She dated David Flair, the son of Ric Flair, in 2000 before moving on to Andrew "Test" Martin in 2001. She's also dated actor Geoff Stults and the one and only Hollywood celeb George Clooney, who she went public with from 2011-2013.

Keibler then began dating her future husband, Future Ads CEO Jared Pobre, in 2013. The two said "I do" the following year in Mexico. Pobre is worth an estimated $200 million.

"My happiness is indescribable!" Keibler told E! after the wedding. "Marriage is the ultimate bond of love and friendship. It means putting all your faith and trust into a person that you can't help but believe is your soulmate. Someone who has all of your best interests at heart; someone handpicked for you, to help you grow and be the best person that you can be. Jared is all of this for me."

How Many Kids Does She Have?

Keibler and Pobre welcomed their first child, daughter Ava Grace, in August 2014. Their second child, son Bodhi Brooks, was born in June 2018. Then in May 2020, Keibler gave birth to the couple's third child and second baby girl, Isabella Faith.

Keibler and her husband packed up their lives in Los Angeles to move to Jackson Hole, Wyoming, to raise their kids in a quieter setting closer to nature.

"When Jared and I went to visit Jackson Hole, we just knew right away it was a place where we wanted to have our kids grow up," she told Parade. "And it's so nice to be active with the kids. We go hiking, we go biking. Jared is an amazing cook so we are always cooking at the house. We're really enjoying a much slower paced life as opposed to the city life that we were used to."

Despite numerous baby bumps over the last decade, Keibler has found a way to stay in shape. Judging from her Instagram and social media, she partakes in boxing and yoga to stay fit. She also bikes and hikes around her Wyoming home.

Stacy Keibler made her debut in the ring some 20 years ago and may be done in the ring at WrestleMania, but the 41-year-old is and will always be a knockout.

This post was originally published on June 18, 2020 but has been updated.

MORE: Trish Stratus Is Still a Bombshell at 44 Years Old