When you talk about unbreakable NASCAR records, they typically revolve around a positive feat or streak. You have Bill Elliott's speed record at Talladega. His 212.808 MPH qualifying time ahead of the 1987 Winston 500 will live forever due to current NASCAR speed restrictions. Richard Petty racked up seven Daytona 500 wins. The only active NASCAR driver with a chance of touching Petty's record is Denny Hamlin, and he only has three wins at The Great American Race. Jeff Gordon set a number of unbreakable records during his Hall-of-Fame career, including most NASCAR Grand Slam wins and most consecutive NASCAR Cup Series starts. Then, there's J.D. McDuffie.

The Sanford, North Carolina native owns a much more negative NASCAR record that will likely never be broken: the most starts without a single victory. 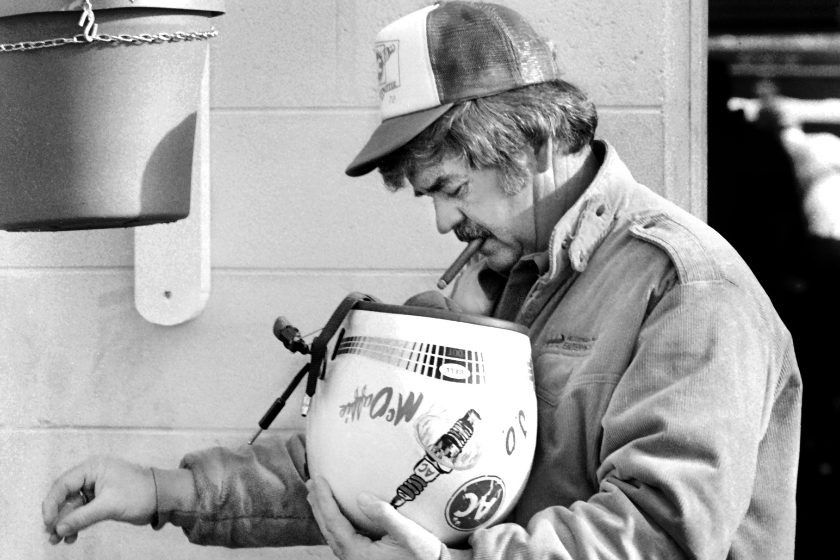 Before his nearly 30-year career in the NASCAR Winston Cup Series, John Delphus McDuffie Jr. saw great success (and actually racked up a number of victories) in the North Carolina dirt track circuit. While he ran several Cup races in 1963, McDuffie made his full-time debut in 1966, driving the No. 70 Ford for McDuffie Racing. McDuffie would compete for the team he owned until his untimely death at Watkins Glen, New York in 1991. More on that later.

Now, McDuffie's 653 Cup starts is impressive in its own right, but the fact that he never once got to see the checkered flag or celebrate in Victory Lane makes him the holder of one of NASCAR's saddest records. He also was the longtime holder of the record for the most last-place finishes (32) until 2014, when Joe Nemechek surpassed him. On top of that, he also would never get to celebrate a win as a NASCAR team owner: McDuffie Racing also fielded winless racers Jeff McDuffie, Glen McDuffie, Henley Gray, Charlie Baker, Larry Manning, Dick May, Rodney Bruce, Larry Esau, and Tom Usry over the years.

Rest assured, McDuffie did see some relative success on the track. His 106 top-10 finishes are nothing to sneeze at, and McDuffie Racing also racked up 11 top-five finishes and 354 top-20 finishes before the team shut down operations following McDuffie's death. Yet, despite the longevity of McDuffie's career, he is often regarded as one of the most forgotten NASCAR legends. Unfortunately, it was McDuffie's tragic demise that perhaps most definitively solidified him a spot in stock car racing lore.

McDuffie had come into the 1991 Budweiser at The Glen in high spirits. Just one day before the race at Watkins Glen International, McDuffie had won a celebrity race at the Shangri-La Speedway in Owego, New York. But, tragedy would strike on just the fifth lap of the Watkins Glen Cup race after McDuffie suffered a mechanical failure and collided with Jimmy Means. McDuffie's No. 70 Pontiac slid across the infield grass and hit the outside retaining wall and tire barrier. The impact was so great that McDuffie's car got airborne, rotated in mid-air, and then came to a rest upside-down. Means suffered only minor cuts and bruises in the accident, but after getting a glimpse inside McDuffie's race car, he later said, "It was so bad that I just had to close my eyes."

McDuffie had died instantly from a basilar skull fracture, the same cause behind the tragic deaths of Kenny Irwin, Adam Petty, and Dale Earnhardt Sr. years later. McDuffie's death spurned a number of eventual safety changes in motorsports, including the creation of the HANS device and the development of safer race track features. While J.D. McDuffie never won a race, it would be hard to write the all-encompassing book on NASCAR history without including his name in its pages.

MORE: NASCAR Implemented Pit Road Speed Limits After the Tragic Death of a Crew Member in 1990