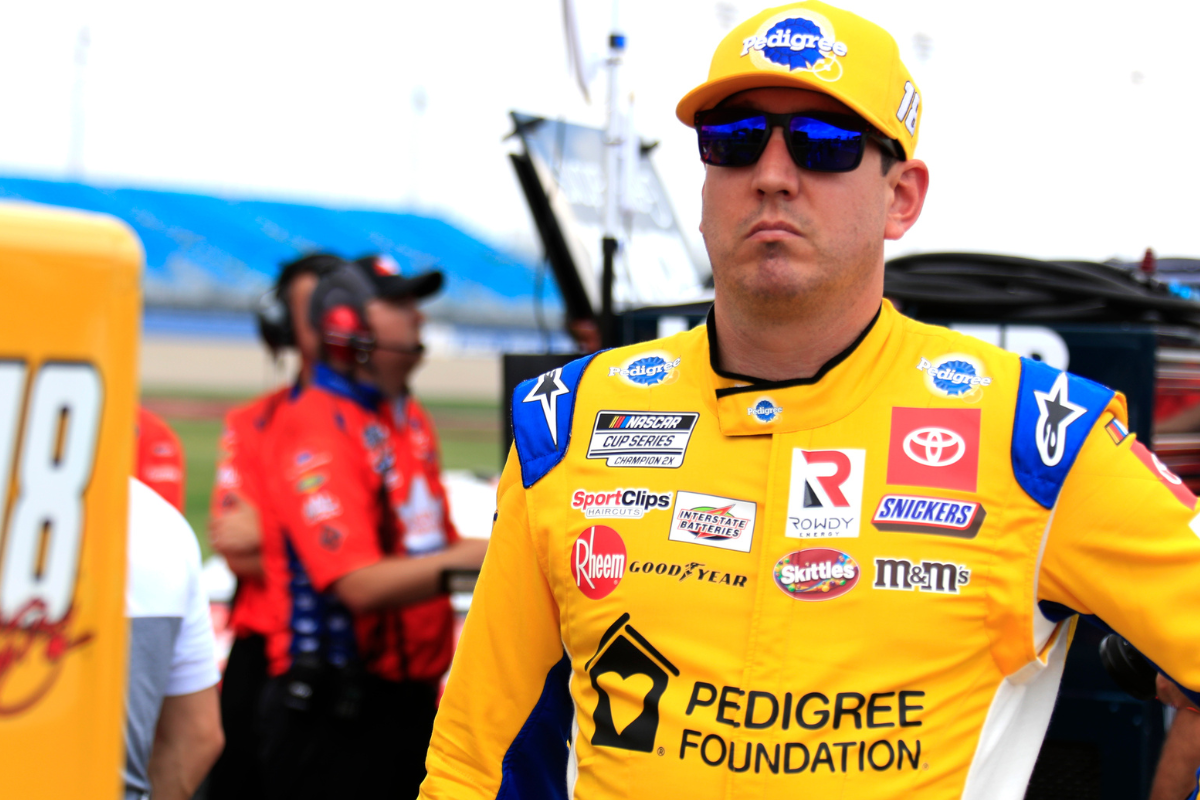 When Kyle Busch steps behind the wheel of a NASCAR stock car, he really shines in two distinct areas: racing and ranting. During the Ally 400 at Nashville Superspeedway, the driver of the No. 18 Toyota for Joe Gibbs Racing showcased the latter skill.

Busch, who ultimately ended his day with a 21st-place finish, was frustrated with his car’s driving throughout the Cup race. On the final lap, rather than attempt to make up any ground and race hard through the finish, Busch opted to ride the wall after an ill-advised call to hit pit road with only a few laps to go. Busch’s late-race tantrum was one thing, but it was the comment he made to his team over the radio regarding the Next Gen car that made the rounds on social media.

“These [Next Gen cars] are the biggest pieces of s*** in traffic,” Busch said.

During a recent podcast appearance, Griffin said that Busch’s unquestionable racing talent along with his penchant for providing the perfect soundbite makes him one of the best drivers to represent NASCAR.

Love or hate Kyle Busch, it’s hard to argue against Griffin’s point. Polarizing figures like the 37-year-old Las Vegas native who run their mouths and often demonstrate the skill to back it up move the needle in any sport. The drivers who are calm and humble in victory and in defeat may gain the respect of fans, but they’re usually not making headlines. Among the number of issues NASCAR faces is a problem developing exciting and larger-than-life personalities, and Kyle Busch is definitely one of those personalities.

Now, speaking of NASCAR’s problems, one of them seems to be the consistent handling of the Next Gen car. Kyle’s comments may have been blunt, but they weren’t completely off base. In an interview with NBC Sports ahead of the Nashville race, Toyota Racing Development president David Wilson expressed his concern heading into the superspeedway, particularly since the Next Gen Toyotas for Joe Gibbs Racing have been relatively inconsistent this year, going from dominant performances at Charlotte, Gateway, and Kansas to putting up the worst collective outcome at Sonoma since 2007.

“There’s never been more anticipation and anxiety going to the track next week because you haven’t been there before (with the Next Gen) and because you really don’t know what to expect,” Wilson said.

While JGR drivers Denny Hamlin and Christopher Bell both went on to place in the top 10 at Nashville, Kyle Busch and Martin Truex Jr. placed 21st and 22nd respectively. The performances of Busch and Truex seem to be more top-of-mind for the folks at both TRD and JGR, as both drivers have teased retirement in recent months. Truex’s future with Joe Gibbs Racing was uncertain until June 24, when he announced that he would be returning to JGR in 2023, though it’s highly likely that it could be the 42-year-old driver’s last season with the team.

Busch, on the other hand, has been, well, a little more Kyle Busch-esque when it comes to talks about his future with JGR. Back in late April, when asked about his future with the team he’s spent the last 15 seasons with, Busch simply said, “I’m not getting antsy about it. If it happens, it happens. If it don’t, it don’t. Goodbye.”

Needless to say, these comments didn’t sit well with Wilson. Yet, he and others have been committed to keeping Busch on board with Toyota and Joe Gibbs Racing, despite his seeming inability to be diplomatic.

“I’ve been very outspoken relative to Toyota’s view of Kyle Busch, and in spite of his polarizing personality and the heavy lifting he’s presented anybody that he’s been partnered with. We haven’t given up on him. We’re not going to give up on him,” Wilson said.

Wilson’s comments seem to solidify pretty much everyone’s opinions about Kyle Busch: he’s a real pain in the ass to deal with, but it really helps to have him around.