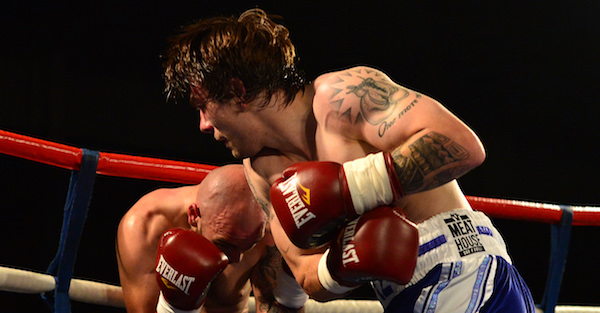 Instagram: Tony Stewart
GLASGOW, SCOTLAND MAY 23 : Mike Towell (blue short), of Dundee takes on Danny Little of Driffield during a Welterweight match up at Glasgow's Bellahouston Leisure Centre on May 23, 2015 in Glasgow, Scotland. (Photo by Mark Runnacles/Getty Images)

You may remember that back in late September 2018, Sprint Car driver Robert Ballou got suspended for the remainder of that season, following a heated exchange with Tony Stewart. It happened after the 4 Crown Nationals at Eldora Speedway, during which Ballou eventually racked up a DNF (Did Not Finish), despite an otherwise solid race, ?after getting up to far into the wall and coming to a stop.?

This caused Ballou to take to Twitter to complain about the Rossburg, Ohio track conditions, which got the attention of Eldora owner Stewart. The two had a back-and-forth, and, after careful examination and a meeting with Ballou several days after the incident, the United States Auto Club Competition Committee (USAC) decided to suspend Ballou.

Below is an except of the conversation that the USAC particularly pointed to when handing down the suspension.

Robert Ballou: ?Maybe once they kill someone at the legendary Eldora Speedway, maybe they will fix the track and (put) it back to the house that Earl (Baltes, former track owner) built. The big one is coming before long. Hope Spencer Bayston is OK. (It?s a) dangerous, dangerous ice skating rink with a wall as the curb.?

Tony Stewart: ?Maybe if it?s too much for you Robert then you should stay home. You consistently run your mouth about what you don?t know. You don?t have to race there if you don?t want to. Legends raced there before you and there will be many after you.?

?I tell you what. Next year, if you come, I?ll give you the track from the Sunday before thru the 4-Crown and you can prep it how ever you want to. If you don?t take me up on it then shut the F up! You?re a little pissy baby.?

Robert Ballou: ?I?m in I?ll assemble a crew. Unlike how you how last May you promised ?wettest and the biggest curb Eldora Speedway has ever seen? then it blew dust in hotlaps almost killed my buddy Rico. Zero effort made last to make the track any better and it isn?t from lack of Equipment.?

Tony Stewart: ?It doesn?t hurt tires and isn?t that slick. But I?m sure you?re a multi time driving champion that totally understands what you?re talking about.?

?Well after the flood of text I?ve got from the same guys you raced against last night, I would just rather you never come back to Eldora Speedway. We don?t need you,? Stewart concluded.

"These actions follow several discussions between USAC and Ballou during the 2016 and 2017 USAC racing season, in which similar actions [detrimental to the sport of auto racing] were repeated."https://t.co/LpB3TcO6Fp pic.twitter.com/790naZzkjO

?I realize that what I said Saturday evening struck a nerve, however that was not my intention whatsoever. I would never want to shed negative light on Eldora Speedway.?

?We are all racing with sad hearts as another legend in our sport passed away a few days prior. Seeing the midget frame after the wreck was eye opening. I just thought if there were a little something to slow your momentum down before hitting the wall, it may be avoided.?

?Never did I say the racing was bad. It was actually good and the Silver Crown race was the best I?d ever seen.?

?Eldora Speedway has spent countless dollars making improvements to the facility and safety. We truly appreciate that.?

?I am sincerely sorry for my message and the way it was taken I love this sport and give my everything to help keep it thriving to what it is today. I just want it to continue to grow and for it to be as safe as possible,? the apology concluded.

The moral of the story? Don’t pick a fight with Tony Stewart!