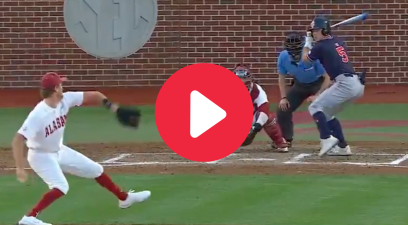 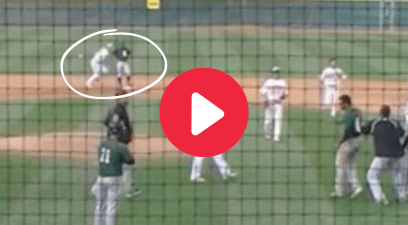 Jaden Hill‘s got it all. A 6-foot-4, 234-pound frame usually found on one of Ed Orgeron‘s tight ends. An upper-90s fastball that could saw off opposing bat handles. A changeup considered by some to be the best in college baseball.

And then there’s Hill’s pedigree: His brother, Kentrell Hill, was drafted by the San Francisco Giants in the 10th round of the 2011 MLB Draft. His cousin, Cedrick Harris, was the starting centerfielder for LSU’s 2000 College World Series championship team.

With an array of un-hittable pitches in his arsenal, the junior right-hander is doing more than helping the LSU Tigers compete in the SEC and hopefully a trip back to Omaha in 2021.

He’s climbing MLB Draft boards and looking to make himself some top dollar when July comes around.

Jaden Hill did it all as a two-way player at Ashdown High School in Arkansas. He boasted a 0.51 ERA and 85 strikeouts while hitting .540 with 11 home runs.

Naturally, he was the No. 1 player in Arkansas by multiple outlets after winning the 2018 Arkansas Gatorade Player of the Year.

Oh, and Jaden Hill played quarterback for Ashdown. He was rated a three-star recruit and had offers from college football teams like Missouri, UCF, Arkansas State, Illinois and Louisiana Tech.

Hill could’ve made himself likely hundreds of thousands of dollars in the MLB Draft that year. MLB Pipeline rated him the No. 78 prospect in the 2018 draft, a selection that typically nets a player north of $700,000.

He was taken in the 38th round by the St. Louis Cardinals, but his mind had already been made up: he was heading south to Baton Rouge’s Alex Box Stadium to play for LSU baseball.

Jaden Hill’s first two years on campus weren’t ideal for a pitcher of his caliber.

The right-hander made the weekend rotation as a starter during his freshman season in 2019. He flashed his abilities in two starts against Air Force and Bryant before sitting out the rest of the season with an elbow injury. He also had a screw removed from his collarbone stemming from a high school football injury.

Hill returned in 2020 with a vengeance. He pitched like it, too. As the team’s lights-out closer and bullpen arm, he allowed just one single hit and zero runs in 11.2 innings while striking out 17 batters. He picked up his first save against Texas and another against UMass Loyell. Then, the coronavirus pandemic cut short what was shaping up to be a dominant season for Hill.

Healthier than ever in 2021, Hill returned to the rotation as a Baseball America Preseason All-American.

“This year, there’s no real holding him back,” LSU head coach Paul Mainieri told reporters before the season started.

“I think he’s going to be fine,” he said regarding Hill’s health as part of the pitching staff. “He’s probably the best athlete on our team and there’s no reason why he shouldn’t have the endurance to be able to stretch it out, but we want to make sure we’re doing the right thing.

The results have been mixed. Hill threw 10 scoreless innings before Oral Roberts clobbered him for eight runs in just .1 innings. Take out that outing and he would own a 3.86 ERA this season.

Even more important is that Hill looks the part. His fastball buzzes by hitters at 98 MPH. His slider is wicked, and his changeup damn near defies gravity.

If all goes right for Jaden Hill, he could hear his name called in the first round of the 2021 Major League Baseball Draft.

What Experts Say About Hill

LSU pitcher Jaden HIll is all but certain to become a first-rounder.

MLB.com posted a mock draft predicting him to be selected as high fifth overall by the Baltimore Orioles. Baseball America has the Seattle Mariners taking Hill with the No. 12 pick.

The fifth pick in the draft is estimated to receive a signing bonus of more than $6 million, while the 12th pick could fetch more than $4 million.

This year’s draft is being held later than usual in July, which will give MLB teams plenty of time to head down to Louisiana State University to scout Hill. If he pitches strongly to to end the season, he could easily leave Baton Rouge a multi-millionaire.

Here’s what baseball experts are saying about LSU’s behemoth pitcher:

“The world currently has 546 nuclear plants generating electricity. Jaden Hill is one of them.” — SB Nation’s Lookout Landing.

“An elbow injury as a freshman and the pandemic this year have limited him to 21 2/3 college innings thus far, but he has added close to 40 pounds and now works with a mid-90s fastball that touches 99 mph and a still-nasty changeup. He has transformed his breaking ball from more of a slurve in high school to a true mid-80s slider.” — MLB.com.

“Jaden Hill should easily be a first-day draft pick. He shows ability with his fastball and off-speed pitches, as well as having a repeatable delivery that consistently hits 97mph. If he can showcase his durability he could be a mid to lower 1st Round pick. However, if he’s restricted to a bullpen role, and occasional starter, that could be much later.” — ProspectsWorldwide.com.