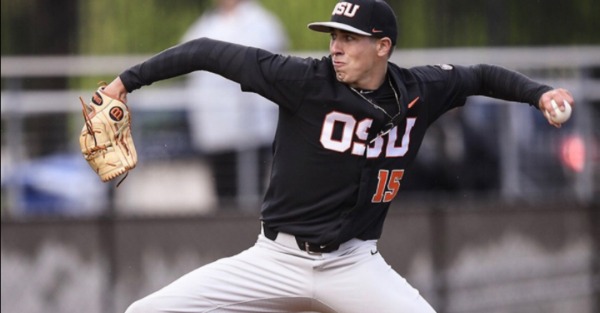 Oregon State should be preparing for a run on the NCAA College Baseball World Series, but instead, the team is facing serious questions about a star pitcher who happens to be felon convicted of a sex crime.

Luke Heimlich, a 21-year-old southpaw who is arguably the best pitcher in the nation, is a sex offender who, at the age of 15, was convicted of inappropriately touching a girl who was between the ages of four and six, according to a report in the Oregonian. The incident happened when he lived in Washington state, and the newspaper had the disturbing details:

The girl told investigators that inside Heimlich’s bedroom, he pulled down her underwear and “touched her on both the inside and outside of the spot she uses to go to the bathroom,” according to court records. “She said that she told him to stop, but he wouldn’t,” the documents state, and that “it hurt” when he touched her.

Heimlich pleaded guilty to one count of  molestation, a class A felony in Washington, and as part of his conviction, he had to register as a sex offender. While most states keep juvenile court records private, Washington allows some to be made public, but that’s not what brought this case into public view. It seems that Heimlich let his sex offender registration in Oregon lapse, and he was caught up in a sweep of the Benton County (OR.) Sheriff’s Department hunting down sex offenders. That record made its way into the Oregon court system, and the Oregonian discovered it while writing a profile on Heimlich.

According to the newspaper, team head coach Pat Casey and athletic director Scott Barnes have refused comment, and Heimlich hasn’t responded to requests for comment. Among the questions — did Heimlich tell OSU officials about his conviction and sex offender status and if he did, when did he do it? If the university knew, why was he allowed to play? If they didn’t know, but do know, does that impact his standing with the team as they march toward a possible NCAA championship? Will be be allowed to pitch?

Barnes did say Oregon State doesn’t have a policy against banning students convicted of felonies from athletic participation.  A university spokesman, Steve Clark, told the Oregonian that the sheriff’s department shares it list of sex offenders with the school and the OSU cross checks it against its database of students. But there’s no word on how often that list is updated, and while the school does share the information with a few departments, like human resources, athletics automatically doesn’t get a copy, Clark said.

On Thursday, Oregon President Ed Ray issued a statement, in which he called the report “disturbing,” and said he doesn’t condone the conduct.  The statement appeared, in full, in the Oregonian.

You already may have read or heard about an article published today on OregonLive and in The Oregonian questioning the university’s admissions policies. This news story also provided information regarding a reported past sexual offense conviction involving an individual, who is now enrolled as an Oregon State University student.

I find this account disturbing and want to let you know that OSU does not condone the conduct as reported. But we also understand that this case involves a criminal matter that was previously addressed by the judicial system in the state of Washington.

We take this issue very seriously, and I want to be clear that each day the safety and security of our students, faculty and staff is Oregon State University’s number one priority. Our policies and procedures seek to provide a safe learning environment for our entire community and to ensure that all prospective and current students are treated fairly and equitably.

By university policy, all OSU students – including student-athletes – are subject to the same academic criteria, admissions standards, codes of conduct and community standards while applying to and attending the university. OSU follows U.S. Department of Education recommendations that universities not allow a person’s criminal history to affect disproportionately a student’s access to higher education and opportunity for a better life.

Heimlich has been dominant this season, He’s 11-1 with a 0.76 ERA with 128 strikeouts in 118 innings and a WHIP — walks plus hits per innings pitched — below one, at 0.98. Baseball America ranks the 6-foot lefthander as the 31st best prospect in the upcoming three-day MLB draft, which starts Monday. That means he’s in line to be a first-round pick and command a million-dollar plus singing bonus. (Last year’s No. 31 pick received a $1,350,000 bonus.)

The Heimlich case brings to the fore the subject of athletes and preferential treatment. Last year, the Stanford swimmer Brock Turner was convicted of sexually assaulting an unconscious woman and served about three months in jail — even though the prosecution asked for 14 years.