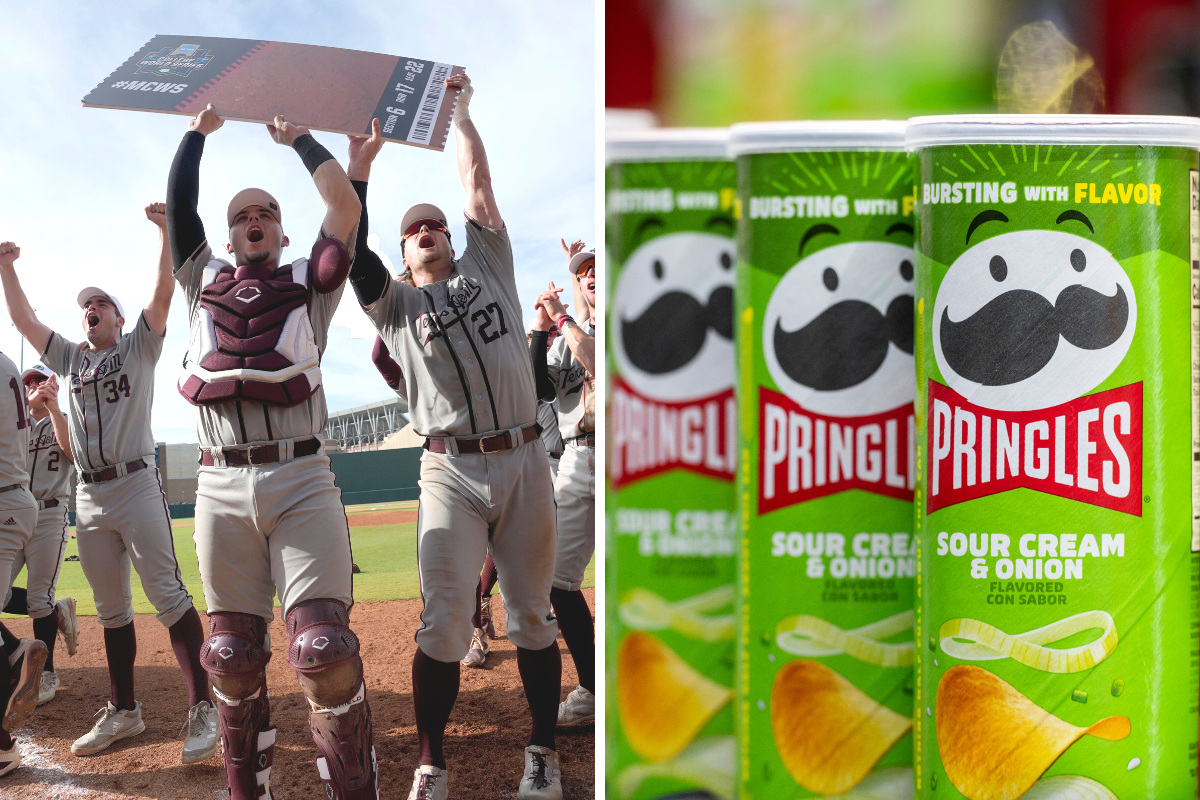 Texas A&M’s baseball team has a chip on its shoulder…and a chip in the dugout.

While a potent offense has been a constant all season at College Station’s Olsen Field at Blue Bell Park, there’s been another constant every game: Pringles. Yes, like the curvy, salty snack in the cylindrical containers. The Aggies have rallied this season behind the chips and earned a trip to the College World Series in Omaha, marking the seventh time in program history and third time since 2000 they’ve reached college baseball’s premier tournament.

Fans might be a little curious when they see Texas A&M players munching on Pringles when the team takes on Oklahoma in the first game on Friday. Fear not, as I’m here to explain how and why the chip brand helped the Aggies become one of the best teams in the nation.

A Speech From the Head Coach Created the Pringles Craze

Texas A&M pitcher Micah Dallas has undoubtedly been the man with the can all season. He explained to The Eagle that the Pringles craze was born after head coach Jim Schlossnagle delivered a speech saying they were “hungry for wins” after a loss to Houston on March 15 dropped the team to a 10-6 record.

“He was saying winning needs to be like you’re eating Pringles,” Dallas said. “He asked if we’d ever had a Pringle and we’re like, yeah, and he’s like, you can’t just eat one. You’ve got to have them all. So, we kind of just took that to heart and we all kind of liked that idea.”

They’ve taken it more than just to heart. They’ve taken them across the country, to cities like Baton Rouge, Austin, Tuscaloosa, Athens and Nashville. The Aggies went 32-12 after Schlossnagle’s speech. They won the following series against LSU and won their last seven regular-season SEC series.

As the old Pringles saying goes, “once you pop, you can’t stop.”

Texas A&M’s dugout has rules for the Pringles, though. There are three reasons a player might have the honor of chowing down on chip mid-game: scoring runs, doing anything that helps the team or a pitcher throwing a shutdown inning, as Dallas explained. A win means Schlossnagle and key players from the game get a pringle. Who needs a game ball anyway?

“I get one after we win. I’m a big fan. The homers and the big hits are great, but the best part of my day is after some hi-fives and I get my Pringle,” Schlossnagle told reporters prior to their regional games against Louisville.

Texas A&M head coach Jim Schlossnagle on the Pringle tradition: "I get one after we win. I'm a big fan. The homers and the big hits are great, but the best part of my day is after some hi-fives and I get my Pringle."

"Hopefully I can get two Pringles this weekend."

The craze got so big that Pringles’ people even saw what was going on and decided to jump on board.

Pringles sent the team a massive package (I’m talking more than 70 pounds) of what we can only assume is chips on chips on chips. However, the players have not opened it yet for fear of NCAA compliance issues.

Schlossnagle wasted no time taking a shot at the NCAA because of this.

Texas A&M baseball coach Jim Schlossnagle on trying to figure out if a big box that Pringles sent his program violates any rules:
'The NCAA is always looking to screw up a good day'

This didn’t stop the Pringles peeps from making their way down to College Station for the team’s Super Regional games. The “Mr. P” mascot even showed face and, unsurprisingly, Texas A&M swept the Cardinals.

The Pringles aren’t the reason for the Aggies’ incredible season or why their season will end in Omaha. It’s merely a symbol of the fun they’re having while kicking everyone’s ass.

Pringles in Omaha is coming to a TV near you. We just need the school and the chip brand to collaborate on their own flavor now.