The South Carolina Gamecocks wrapped their regular season as the No. 1 seed in the NCAA, going 28-1. Their strong entry into the March Madness Women's Basketball Tournament is in large part due to the play of South Carolina junior phenom Aliyah Boston. The St. Thomas-born forward is one of only three players to get minutes in every game, and averaged a double-double to boot.

Not only did she average a double-double in points and rebounds, but she was the only Gamecock to average more than 5.4 rebounds per game. Her presence on the court has been the most integral part of Dawn Staley's South Carolina squad's success. Boston leads the team in points, rebounds and blocks, while also sitting second on the team in assists and steals. This young woman is an absolute powerhouse.

And that's good, because she's going to need to continue to be in order to make a deep run in the tournament. Her ceiling is high, and she's nowhere near peaking. Aliyah's game has been on an upward trajectory for quite some time, and she will absolutely have the opportunity to make her mark on the WNBA if she chooses to do so.

Boston attended Worcester Academy in Massachusetts and earned the state's Gatorade Player of the Year in 2017, 2018 and 2019. In her sophomore year, she averaged a staggering 23 points, 14.7 rebounds, and 4.8 blocks per game. Think about that. She was 15 years old with those stats. She followed up with a junior year of 21.2 PPG, 14 RPG and 6.2 BPG. Then a senior year with 17.3 PPG, 10.6 RPG and 3.2 BPG. All while averaging about two assists and two steals through those three seasons as well.

After her sophomore season, Worcester Academy head coach Tara Brisson had this to say as part of her Player of the Year nomination:

"Aliyah is unguardable most of the time. She is so skilled and strong, and the leap she has made between last year and this year is insane."

That was true then, and it's true today. Aliyah Boston is one of the premier women's basketball players in the country.

And those were just the beginning of an award-riddled career. Since getting to South Carolina, Boston has continued to rack up college basketball plaudits.

In her freshman and sophomore years, Boston was named to the All-SEC First Team and owned or shared the title of SEC Defensive Player of the Year. The Athletic named her National Player of the Year in just her Sophomore campaign. Now that her junior year is approaching its climax, Boston is continuing to add individual honors to her trophy case. After a 20th straight double-double on February 24, Boston surpassed Sylvia Fowles for the SEC record in consecutive double-doubles.

Boston has also been a front runner for USBWA Women's National Player of the Year honors, and the debate has raged all season as to whether or not Iowa's Caitlin Clark can spoil Boston's moment in the spotlight.

The 2021 SEC Tournament MVP was also awarded to Boston, so she will undoubtedly be looking to claim that for a second year in a row. Doing so would continue to grow a confidence that could lead South Carolina back to the National Championship game for the first time since 2016.

The scariest part of Boston's game is that she can both start and finish an attack. With over 200 defensive boards and over 400 points, she has been able to dictate the pace of the game, remove second chance opportunities for her opponents, and finish strong at the basket. She completely bosses the game from end to end.

In addition to her high school and college contributions, Boston has found her way into the national spotlight, representing the United States in both FIBA and Olympic youth tournaments. The even more impressive feat is that she's walked away with gold in all five.

Unfinished Business for Boston, Staley and the Gamecocks 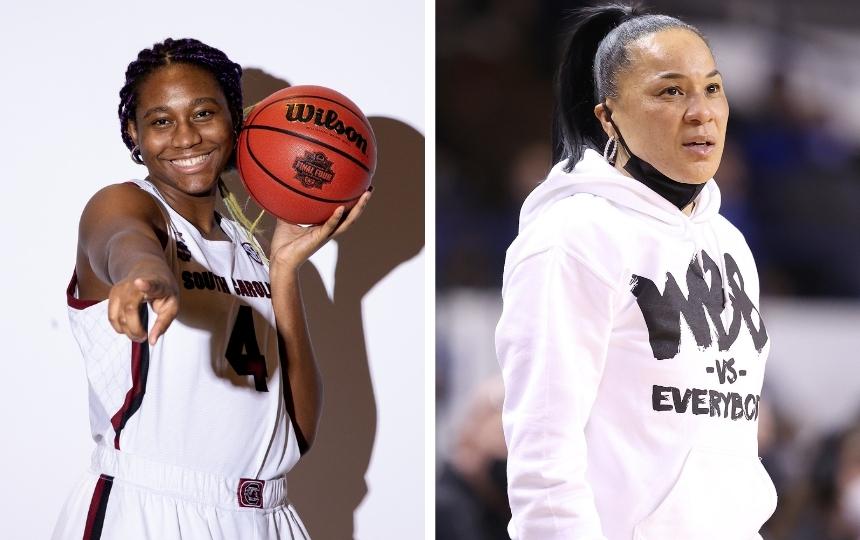 South Carolina is heavily favored to cut the net when the NCAA Tournament closes in early April, and Boston must be ready to take out real estate to build out her trophy case. If she continues the tear she's been on since November, it will be really difficult for anyone, even the likes of UCONN, to stand in her way.

Dawn Staley's Gamecocks have taken a rocky road to the 2022 March Madness tournament and have struggled to regain their footing in women's college hoops since lifting the school's first National Championship trophy in their history.

Last year, South Carolina advanced to the Final Four and faced off against eventual national champs Stanford in a game that went down to the wire. With 9.1 seconds on the clock and Stanford with possession, South Carolina needed a steal. After Stanford inbounded the ball, Boston was able to strip it and get it into the hands of a charging Brea Beal who took the ball in for a layup. Brea's touch was a little too heavy and the ball came off the rim and straight into Boston's hands. Without hesitation, Aliyah Boston threw up a last-minute put-back with 0.3 seconds on the clock. Iron. Game. South Carolina fell to Stanford, 65-64.

Those kinds of losses stay with you. They fuel your regular season, keep you up at night during the conference tournament, and push you to get back to that same game the next year. Boston and South Carolina fell to Kentucky in the SEC Tournament once again with less than 10 seconds on the clock. This time it was a Dre'Una Edwards three-pointer that knocked off the Gamecocks. Not only did this loss sting, but the game was televised nationally on ESPN.

It remains to be seen whether Boston will be able to help close the book on a storybook season for the Gamecocks. But, without a doubt, nobody is doubting her finishing ability. It's only a matter of time before she finds herself standing at the top of the pedestal.

MORE: Revisiting the Poor Conditions at the 2021 Women's NCAA Tournament