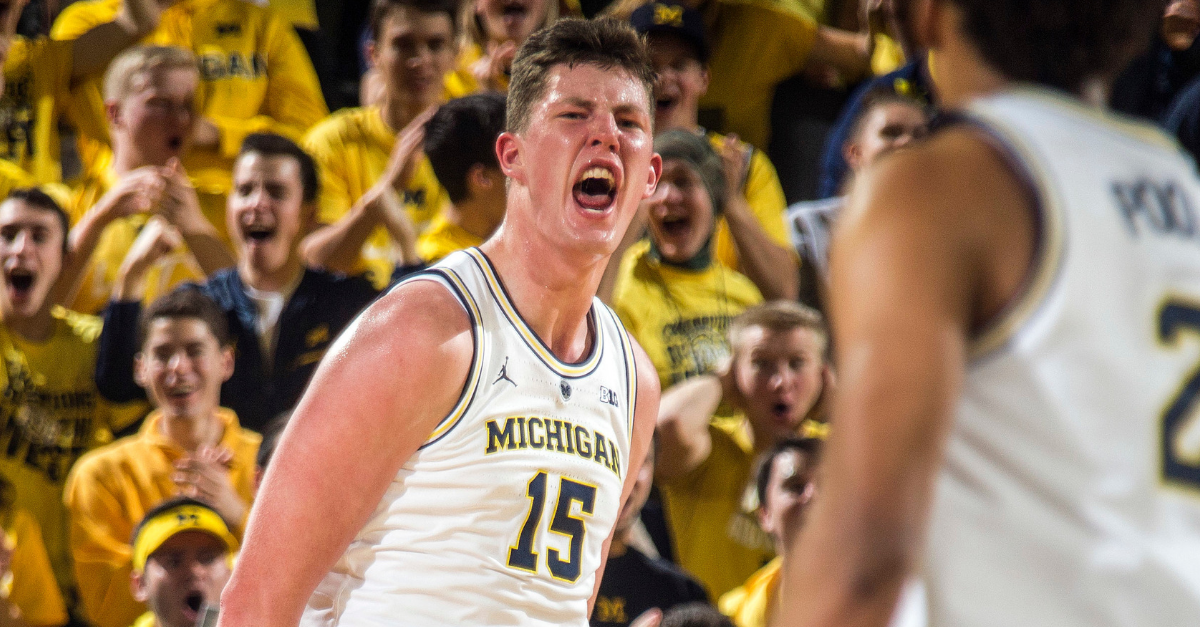 RALEIGH, N.C. (AP) — Maybe AP Top 25 voters were a bit too low on Michigan to start the season. That isn’t the case anymore.

The Wolverines (8-0, 1-0 Big Ten) have made a rapid rise to reach No. 5 in Monday’s latest poll behind Gonzaga, Kansas, Duke and Virginia after their latest impressive wins. They’ve beaten every opponent by at least 17 points, with three of those coming against ranked teams.

The Wolverines are off to their best start since winning the first 16 games of the 2012-13 season, a year that saw them play in the NCAA Tournament final. That’s also the last time the Wolverines had cracked the top 5 before Monday.

The success has come amid the program’s shift to a more defensive focus. Michigan ranks first in the country in KenPom’s adjusted defensive efficiency, allowing an average of 86.8 points per 100 possessions.

“They’re learning that sometimes you’re not going to make a foul shot, you’re going to turn it over, you’re going to have a tough ref’s call,” Michigan coach John Beilein said after Saturday’s home win against Purdue. “Your defense can be the one constant, as long as we keep embracing that, we can keep having success.”

Michigan started the year at No. 19 but quickly leaped into the top 10 after beating reigning NCAA champion Villanova by 27 on the road on Nov. 14 in a rematch of last year’s final.

Last week, Michigan was seventh before beating two more ranked opponents at home: North Carolina by 17 in the ACC/Big Ten Challenge, then Purdue by 19 in its league opener.

They also rank among the most efficient offenses in the country, while they’ve proven adept at defending without drawing whistles — ranking among the nation’s best at avoiding fouls and keeping opponents off the foul line.

Yet Beilein chuckled when asked if he was having a difficult time finding things to critique with his team’s play after the Purdue win.

The top four remained unchanged in the poll, with Gonzaga earning 43 of 64 first-place votes. Kansas had 19, while Duke and Virginia each had one.

Michigan jumped Nevada and Tennessee, which checked in at No. 6 and No. 7. Auburn, Kentucky and Michigan State rounded out the top 10.

No. 11 Florida State and No. 17 Buffalo also had notable climbs, each moving up four spots.

Kansas State and Iowa had the biggest slides among ranked teams, with both falling four spots. The No. 16 Wildcats tumbled after a loss to Marquette , while the No. 18 Hawkeyes fell after losing to Wisconsin .

UNC and Ohio State each fell three spots. The No. 14 Tar Heels lost at Michigan a week after losing to Texas, while the No. 19 Buckeyes lost to Syracuse in the ACC/Big Ten Challenge.

There were three new teams in No. 20 Arizona State, No. 24 Nebraska and No. 25 Furman. It is Furman’s first AP poll appearance and comes a little more than two weeks after the Paladins won at Villanova in overtime.

The Cornhuskers are making their first poll appearance since November 2014. Arizona State, however, spent much of last season in the poll and peaked at No. 3 last December.

While the Boilermakers lost against ranked FSU and Michigan teams, the Ducks and Longhorns each suffered surprising upsets. Oregon lost as a 24-point favorite at home to Texas Southern, while Texas lost at home to Radford.