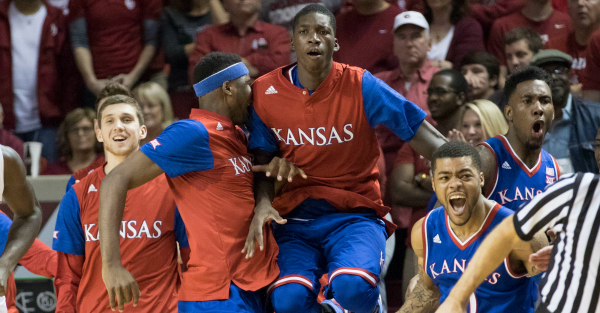 Kansas has been all over the AP Poll this season and has made its way back to No. 2 after wins over West Virginia and at Oklahoma. However, Villanova stayed atop the poll for the second straight week with Oklahoma and Iowa staying put at the third and fourth spots. UNC had a nice move up to No. 5 after wins over Boston College and a beatdown of Pittsburgh.

Kentucky got a whole lot of love after destroying Georgia and winning at South Carolina despite Coach Cal’s ejection. The wins moved the Wildcats up eight spots and Notre Dame moved up seven spots with wins over Clemson and Louisville. Duke also got back into the poll with wins over Louisville and Virginia.

Here’s the poll in its entirety: