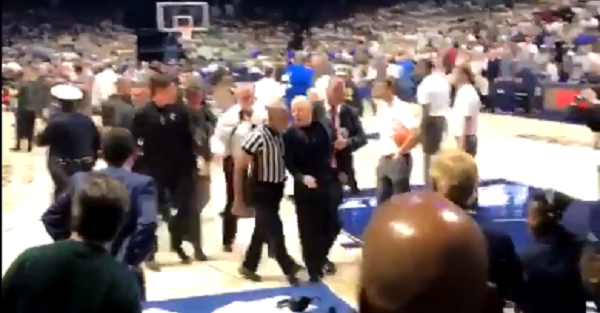 The Crosstown Shootout is one of the nastiest rivalries in college basketball between Cincinnati and Xavier. The infamous 2011 brawl led to the schools not playing on campus for a few years and it looks like the bitterness hasn’t left as Cincinnati head coach Mick Cronin looked like he tried to fight a Xavier player in the handshake line.

Cronin had to be escorted off the court afterward and went after Xavier senior JP Macura in his post game press conference. Here’s what the coach said about the interaction with Macura:

Mick Cronin on his interactions with JP Macura. pic.twitter.com/5ioLhPynef

Xavier coach Chris Mack’s response was not exactly kind and he dropped the mic on Cronin:

Xavier won the game 89-76 and controlled the game more so than the score indicates. Cronin clearly doesn’t like losing like that, but going after a player for any reason is just unacceptable.