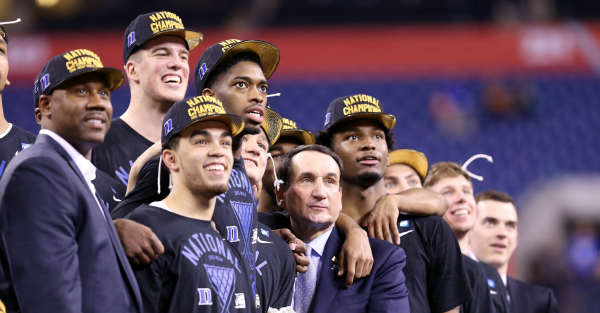 Duke’s Mike Kryzyewski has always been thought of as an old-school kind of guy who likes to lean on his upperclassmen to help get wins. However, he was able to come away with his fifth championship because of three freshmen who ended up going to the NBA Draft this year.

Jahlil Okafor, Justise Winslow, and Tyus Jones all were taken in the first round, but Coach K says that if the rules were what he thinks they should be he might not have had those guys to help him out. He is actually a big supporter of kids being able to go pro straight out of high school, which is something Okafor would have undoubtedly done with all the hype he was getting.

Krzyzewski told ESPN that there is more urgency for kids to “leave as early as possible” for the NBA because of how the salary cap has been rising in recent years. He detailed it a little bit more than that and said that these kids have to capitalize on the time they could potentially have as professionals.

“The way the [salary] cap has gone up over a two-year period, going up over 40 million as a result, if I’m a really good player, I would petition to look at coming out of high school.They don’t play basketball their whole lives. They play for X amount of years. I’ve always been a big proponent of kids having the ability to go out of high school. But if they go to college, they would stay two years. But that’s never gotten the traction.”

Coach K added that the NBA draft rule is an NBA rule, collectively bargained with the players’ association, leaving the NCAA and its coaches without an ability to change the rule. That has to change as the NCAA pretty much acts as a farm system for the pros more so than the D-League ever could — at least how it’s made up right now.