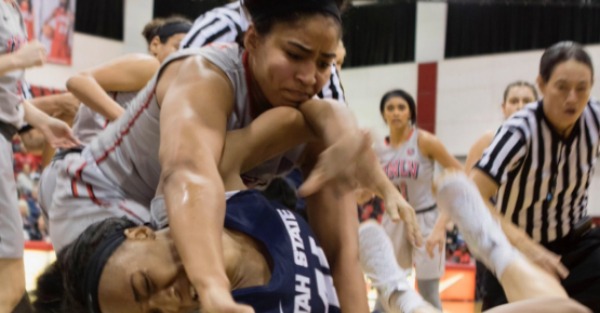 An ugly and unusual scene broke out Saturday during a women’s basketball game between UNLV and Utah State at Cox Pavilion.

Early physical play between Lady Rebels center Katie Powell and Utah State’s Antoina Robinson came to a head in the third quarter when a shove from Robinson sparked a bench-clearing brawl that saw players from both sides throwing punches and getting tangled up in a rugby-like scrum.

A fight broke out in the UNLV Utah State women's basketball game. pic.twitter.com/JzwutY8A9n

Never a dull moment. A fight broke out between some Lady Rebels & Aggies during the #UNLV game today. I was right there snapping shots. pic.twitter.com/jnbmrg3GoV

Powell, who was later ejected for her role in the fight, said she was merely reacting to Robinson coming at her.

“Throughout the game she was playing a little dirty. Words were exchanged. I just told her to chill out,” Powell told the Las Vegas Review-Journal. “And then we came to the other side of the floor. Brooke got fouled. I was walking to go help her up. She bumped me and then pushed me and then I just kind of swung at her.”

RELATED: Despite another tripping incident, Grayson Allen won’t be punished by ACC

When the dust settled, eight players were ejected, leaving just six from the UNLV side eligible to play the remainder of the game. The Lady Rebels were still able to come away with the 55-53 overtime victory, however, recording their first Mountain West conference win of the season.