A College Basketball Player Rode a Freight Train Hobo-Style From Dallas to L.A. 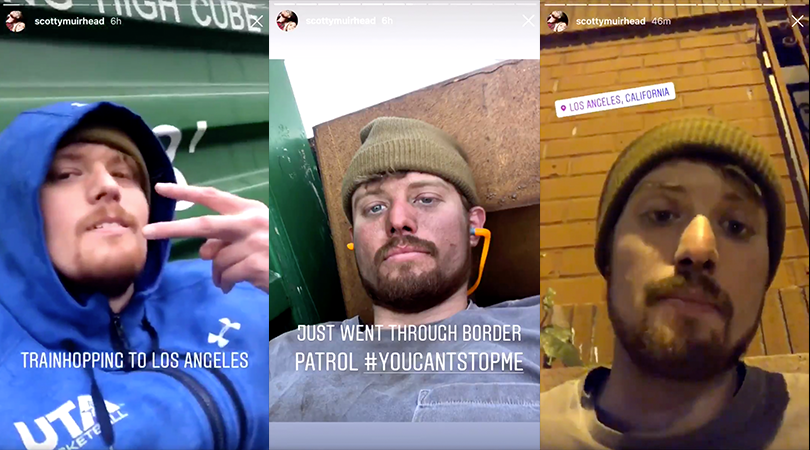 If riding the rails becomes the next big spring break trend — for a year or two anyway, before the limbs and bodies start piling up — look no further than University of Texas-Arlington basketball player Scott Muirhead when trying to figure out who to blame for your daughter getting alcohol poisoning because a can of beans was all she had to eat before drinking three paper-bagged pints of Burnett’s Vodka.

Scott Muirhead, a 6-foot-3 redshirt junior guard for the UTA Mavericks, decided to ride a freight train from Dallas to Los Angeles for reasons that really might not extend beyond, “Because” and/or, “YOLO.” (Both valid.) Muirhead documented the entire trip on his Instagram stories, using geotags to mark his progress. His friend Ryan posted the videos to Twitter to show off Muirhead’s hobo-nouveau travel hack.

So my buddy Scott hopped a train from Dallas to LA and it’s honestly incredible lol pic.twitter.com/FNrHqn3Fg2

Just in case you’re wondering how Muirhead was able to take so many videos while riding an open-air and presumably outlet-free freight car at high speeds through some of the emptiest parts of the contiguous United States, there’s an answer for that. He made sure to toss a couple portable phone chargers into his bindle.

For everyone asking how his phone didn’t die, he brought 9 portable chargers 😂 pic.twitter.com/mZezurBg50

Muirhead ended his journey on a beach in Malibu with his toes in the sand and, as he claimed, Kacey Musgraves’ new album “Golden Hour” on playing repeat.

He also might have been building himself some sort of beach hut from driftwood. There’s pretty much nothing you can put past the guy at this point. He may be secretly living in some Southern California billionaire’s wine cellar now.

And really, would you expect anything less than this sort of excellence from a guy whose teammates nicknamed him Bill simply because he looks more like a Bill than a Scott? (A real fact on his UTA player page, by the way.) Even UTA’s women’s basketball associate head coach Talby Justus praised Bill for his innovative travel style.

“Bill”….you just broke the cool meter! Something I’ve wanted to do my entire life and you just did it! https://t.co/n1bjdxHgZP

Now we have to wait for the film adaptation of this incredible story, “The 69:420 to Yuma”.

Read More: 15 Signs You Know You Were Born a Georgia Bulldog