Duke blows 16-point lead to bow out of ACC Tourney 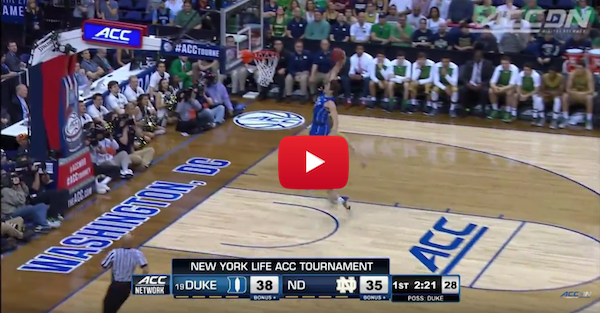 This game between Duke (23-10) and Notre Dame (21-10) proved to be a battle of wills as neither coach goes deeper than seven guys and foul troubles were mounting for both teams. In fact, Grayson Allen, Marshall Plumlee and Chase Jeter off the bench fouled out of the game for Duke while Zach Auguste and Steve Asturia fouled out for Notre Dame. Duke had a 16-point lead late in the second half, but totally blew it and the game and to lose 84-79 in overtime.

All five of Notre Dame’s starters finished in double figure scoring while Duke’s scoring was much more unbalanced. Grayson Allen had 27 points, four rebounds, three assists and four steals while Matt Jones chipped in 13 points and Brandon Ingram had 16 points with seven rebounds. Duke will make it to the NCAA Tournament, but they might have dropped a seed line with the loss.