Five-star recruit was offered over $1 million to play in China, but he wasn’t having it 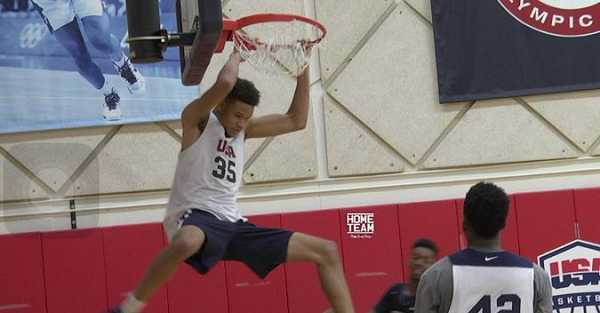 Kevin Knox is one of the most coveted recruits in the country for the class of 2017 and has still not signed with a school. That has prompted at least one professional league to try to tempt him to play overseas for a year before he enters the NBA Draft. It’s not a terrible option as it’s been done by the likes of Brandon Jennings, Emmanuel Mudiay and Terrance Ferguson (a 2017 NBA Draft entry).

In an interview with the Tampa Bay Times, Knox’s father revealed that a Chinese professional team had offered his son $1.4 million to play one year overseas before entering the NBA Draft in 2018. The answer seemed to be a pretty quick one though as Kevin Knox Jr. knows exactly what he wants to do next year. From that interview:

“I didn’t put much stock into the offer,” said his father, also named Kevin. “We politely said thanks but no thanks. He’s going to college.”

Knox is the No. 2 small forward in the country behind Michael Porter Jr. and has listed Duke, Kentucky, North Carolina, Florida State and Missouri as his top five schools right now.