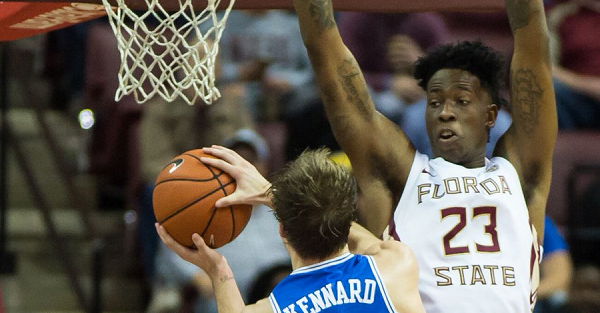 No. 9 Florida State hadn’t beaten No. 7 Duke in its last four tries and it was trying to stop it from becoming a fifth on Tuesday night when the two teams met in Tallahassee. FSU needed its stars to perform and they did with Dwayne Bacon scoring 13 points and dishing out five assists while Terance Mann scored 13 points and grabbed seven boards on the way to a 88-72 win.

Duke was led by Luke Kennard’s XX points and another XX points from freshman Jayson Tatum. Much of the game was a back-and-forth affair, but the lack of Amile Jefferson for Duke proved to be the deciding factor as the Blue Devils pulled fell for the second time in ACC play.

Florida State started pulling away with nine minutes left in the game as the Noles led by ten at that point. The Seminoles would go up by 12 at the under-8 timeout 71-59 and never looked back after that. Xavier Rathan-Mayes got hot in the second half finishing with 21 points total.

FSU shot over 50 percent from the floor and kept Duke to under 45 percent shooting as well. While Kennard still played well, FSU kept Grayson Allen to only nine points on 2-of-6 shooting. The Noles also shot over 35 percent from deep and kept Duke to under 30 percent shooting from beyond the arc. That puts the Noles at 16-1 for the season to match the team’s best start to a season since 1988-89.