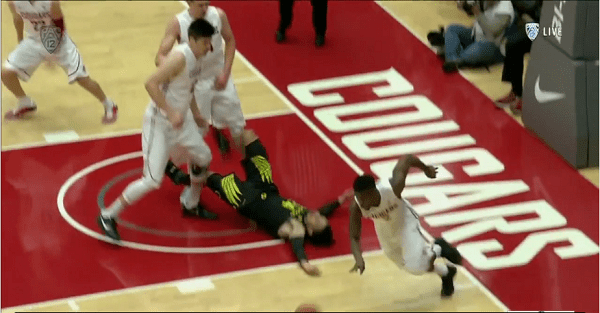 Grayson Allen has been having a terrible public relations year after suffering through a one-game suspension for tripping an Elon player and it looks like he might have gotten away with a trip on Saturday as well against Boston College.

It seems some of Allen has rubbed off on Oregon star Dillon Brooks as it looked like he took a cheap shot against Washington State. He was given a flagrant-2 and ejected for this play:

RELATED: Grayson Allen appears to trip yet another player against Boston College

You could probably argue that his leg being pinned and then getting free sprung his leg forward. It just so happened to go right into the crotch of an opposing Washington State player and brought him to the floor. The other side of that coin is obviously he meant to do it in frustration for not making the shot or getting the ball back. He is not likely to be disciplined by his coach as it is the first time it’s happened and he hasn’t shown any bad behavior before.