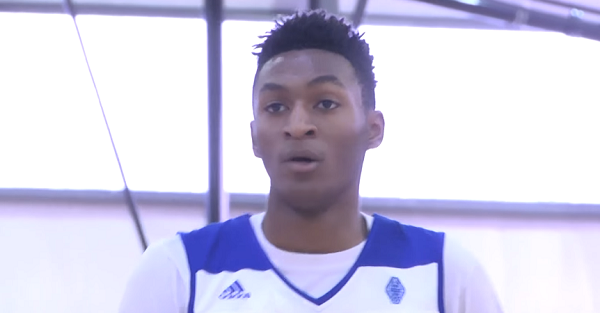 One of the nation’s top basketball prospects has a busy month of college visits planned.

Five-star point guard Immanuel Quickley announced that he will visit Kansas (Sept. 1), Miami (Sept. 8) and Kentucky (Sept. 15) during the next three weekends as he continues his recruitment.

Quickley has narrowed his choices down to the three schools, but currently has Kentucky as his favorite, according to 247Sports.com.

The Maryland native ranks as the top player from his state, as well as the No. 3 point guard and No. 9 overall prospect for the 2018 national recruiting cycle.

Earlier this week, Quickley eliminated the home-state Terrapins from his list of potential schools.

“I’m actually taking Maryland off my list,” Quickley told 247Sports. “They don’t contact me as much so it only makes forward to go ahead with those three.”

Quickley averaged 23.7 ppg and 7.2 apg during his third varsity season in 2016-17. He also scored 30-or-more points five times, as well as 20-plus points in 14 games and also recorded eight double doubles.

Quickley was also recently named to the 2017 USA Men’s U19 World Cup Team and was one of 18 finalists for the 2016 USA Basketball Men’s U17 World Championship Team in June 2016.