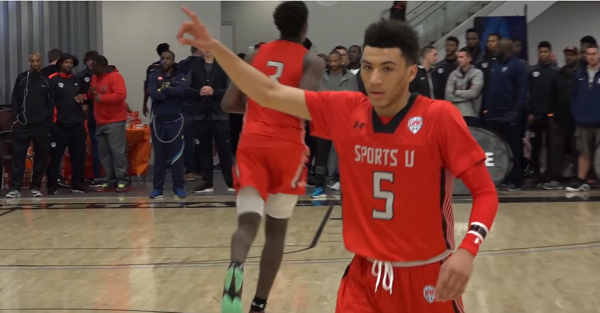 Jahvon Quinerly has officially become the highest ranked recruit to commit to a school so far this summer as he’s decided he will play for coach Sean Miller and Arizona.

Five-star 2018 PG Jahvon Quinerly announces on ESPNU he has committed to Arizona. Big get for Sean Miller. pic.twitter.com/6APlvieRQ2

Quinerly took an official visit to Arizona in June and apparently loved it enough to make his commitment fairly early in the recruiting process. The 6’1″, 160-pound point guard is ranked as the No. 15 overall recruit and No. 3 point guard in the class of 2018 by ESPN.

Quinerly also had offers from Kansas, Villanova, Virginia and UCLA among others. ESPN is even comparing Quinerly (link is for insiders) to former Wildcat Mike Bibby and current NBA player Cory Joseph in that he will beat you with his basketball IQ and will never let an opponent speed him up.

Quinerly becomes the second five-star recruit for Miller and company along with Shareef O’Neal (son of Shaq) and he joins four-star guard Brandon Williams in the class.

Here are some  of his highlights: