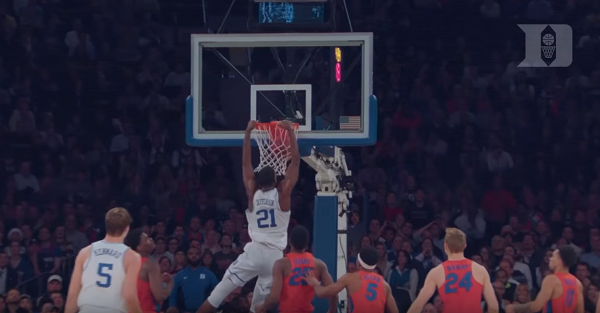 No. 5 Duke took on No. 21 Florida in the Jimmy V Classic at Madison Square Garden, basically Duke’s second home. They got the 84-74 win thanks to monster games from Luke Kennard and Jayson Tatum who came off the bench. Between them and Amile Jefferson they scored 75 points.

Kennard had 29 points, Tatum had 22 and Jefferson had 24 to go with 15 boards for yet another double-double this season. The Blue Devils shot an astounding 52.5 percent from the floor and 41.2 from beyond the arc to down the Gators who couldn’t quite close out the game despite getting to within nine on a couple occasions.

Luke Kennard was definitely feeling himself last night as he was trying to get trash talk game on:

Maybe not the best aspect of his game. Duke next plays at UNLV on Saturday.