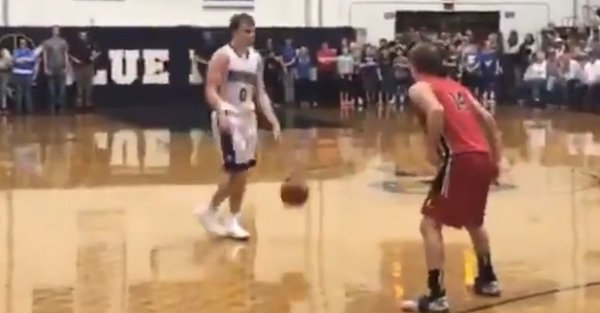 Entering the game 31 points shy of the 948 set by Iverson 25 years ago, McClung scored 41 points and led Gate City to an 80-43 victory over Lebanon during the first-round of the Region 2D tournament.

The senior broke the record on a 22-foot jumper with 6:16 remaining, before adding an additional nine points before time expired.

“You know the record was, it wasn’t something I was really focused on, but to do it here if I’m going to do it you know it was awesome,” McClung told WJHL in Johnson City. It was such a great atmosphere, I think this is the best atmosphere in high school sports.”

?The record doesn’t mean a whole lot. I just want to win a state championship and be the first ones to do it for Gate City,” he added via the Herald Courier.

McClung currently has 958 points this season and 2,607 during his high school career, which ranks fourth in Virginia state high school basketball history.

Iverson, who played at Georgetown from 1994-96, has invited the Hoya signee to play in his Roundball Classic All-Star game scheduled for April, according to the Bristol Herald Courier.

You can check out McClung’s record-setting season highlights in the video below provided by Overtime: