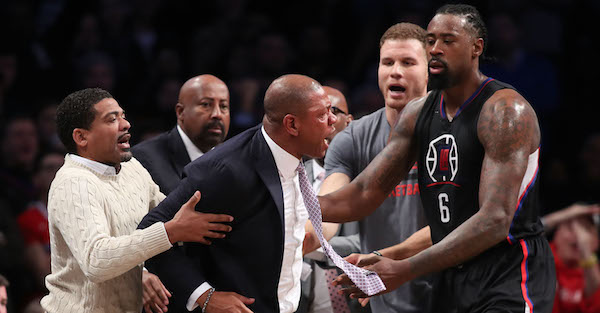 Michael Reaves/Getty Images
NEW YORK, NY - NOVEMBER 29: Head coach Doc Rivers of the Los Angeles Clippers is held back by DeAndre Jordan #6 and Blake Griffin #32 after a technical foul call against the Brooklyn Nets in overtime at Barclays Center on November 29, 2016 in the Brooklyn borough of New York City. NOTE TO USER: User expressly acknowledges and agrees that, by downloading and or using this photograph, User is consenting to the terms and conditions of the Getty Images License Agreement. (Photo by Michael Reaves/Getty Images)

Tom Crean is longer at the helm for the Indiana Hoosiers, as the long-time head coach was let go on Thursday afternoon in what was a legendary “news dump” by the university at the outset of the 2017 NCAA Tournament. While most of the focus in the college basketball world remains on the on-court product, there is plenty of speculation as to who will take for Crean in Bloomington. On Thursday afternoon, Jeff Goodman of ESPN brought an interesting name to the table in the form of current Los Angeles Clippers assistant coach Mike Woodson.

Doubt he can get it, but told by numerous sources former IU standout and current LA Clippers assistant Mike Woodson has high level of interest in Indiana job.

Though Goodman’s assertion that Woodson would not be at the top of anyone’s mind is likely correct, this would be interesting. Woodson averaged 19.8 points per game over an illustrious four-year career with the Hoosiers as a player from 1976 through 1980 and he enjoyed some varied success as the head coach of both the Atlanta Hawks and the New York Knicks in the NBA.

Still, he isn’t a name that would excite anyone for one of the best jobs in college basketball, even with the caveat that Indiana would love a former Hoosier to take over the program. Mike Woodson probably won’t get the job but it would be interesting if he did. That’s for sure.