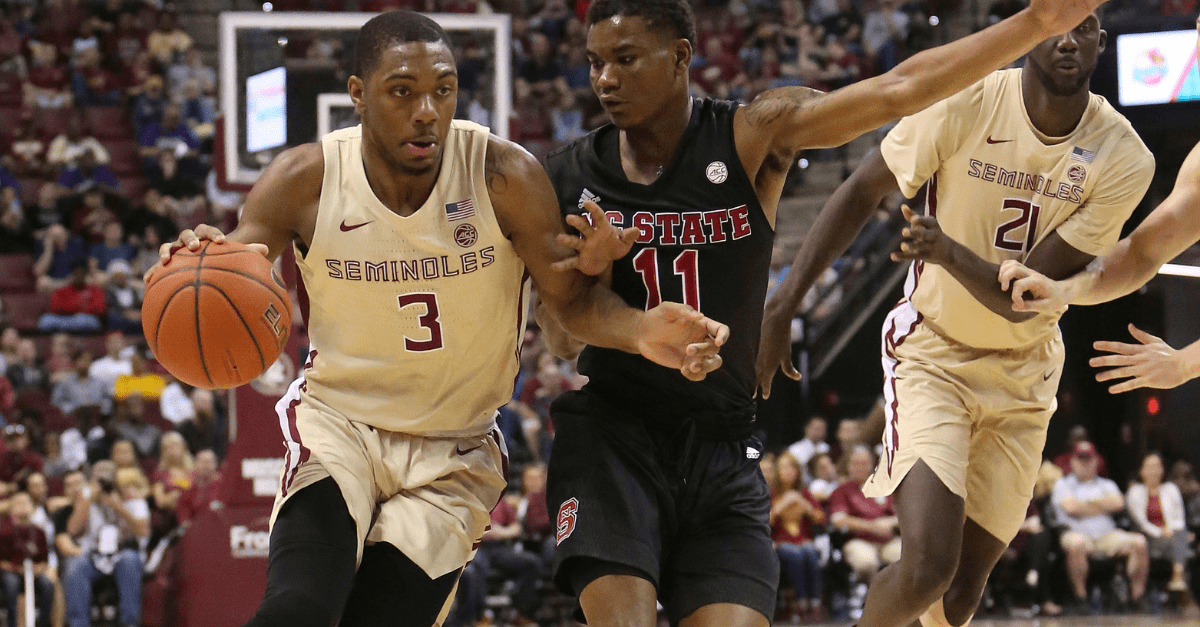 TALLAHASSEE, Fla. (AP) ? Trent Forrest has been in pain with a toe injury throughout the season. The Florida State guard hasn’t missed a game yet, though, and he pushed through to provide a second-half spark Saturday.

Mfiondu Kabengele came off the bench to score 16 points, Forrest added 11 of his 13 points in the second half and the No. 18 Seminoles held off North Carolina State 78-73.

Forrest was quiet early but drove to the basket with ease in the second half, helping Florida State (23-6, 11-5 Atlantic Coast Conference) hold on. He shot 5 of 10 from the floor with a team-leading six rebounds, three assists and two steals.

“He’s a competitor,” Florida State coach Leonard Hamilton said. “He’s not 100 percent, but he gives you what he has every time he walks on the court. That’s the true measure of a person’s character is how do they respond under adversity.”

Well that sets up a pretty large game Tuesday night.

The Wolfpack gave the Seminoles some adversity to deal with Saturday. While it never trailed, NC State kept clawing back and had a chance to win in the final minute.

Devon Daniels blocked Kabengele and Torin Dorn grabbed it with 24 seconds left and the Seminoles leading 76-73. After a timeout, Braxton Beverly dribbled the ball beyond the 3-point arc but was fouled.

He missed the front end of a 1-and-1, and Kabengele rebounded. He was quickly fouled, making two free-throw attempts to seal it.

“I thought we had our chances, especially late in the second half,” NC State coach Kevin Keatts said. “It seemed like every time we cut the lead they did a great job making a big play, whether it was an offensive rebound or getting a steal.”

Florida State made enough plays down the stretch, holding on to win 11 ACC games for the second time in three seasons. Florida State has won 12 ACC games three times since joining the league in 1991-92. With two games remaining, it has a chance to match it or tie the mark.

DJ Funderburk fouled out with 1:09 left, tying a season high with 18 points and pulling down nine rebounds for NC State (20-9, 8-8). Dorn, who leads the Wolfpack in scoring at 13.9 points, was 0 for 4 from the floor in the first half but finished with 12 points.

M.J. Walker scored 11 of his 15 points in the first half, putting him in double figures for the first time since Feb. 9.

Kabengele shot 7 of 8 from the free-throw line while adding five rebounds and four of the Seminoles’ season-high nine blocks. It was the 19th time in 29 games he has scored in double figures, with all of them coming as a reserve.

Florida State is 8-1 in February and March. The Seminoles opened ACC play at 1-4, including a buzzer-beating loss at home to No. 1 Duke. Since a Jan. 22 win over Clemson, the Seminoles have reeled off 10 victories in their last 11 games.

“I think it’s just the maturity,” Walker said. “We obviously understand what we need to be doing on and off the court. We know what’s at stake for us. We know how good we can be, the potential we have on this team.”

Florida State is in position to move up, possibly into the top 15, on the heels of consecutive wins over Notre Dame and NC State.

Florida State: The Seminoles are 14-1 at home this season and 48-3 in their last 51 games in Tallahassee.