The Lady Vols Basketball Program is Mourning Another Tragic Loss 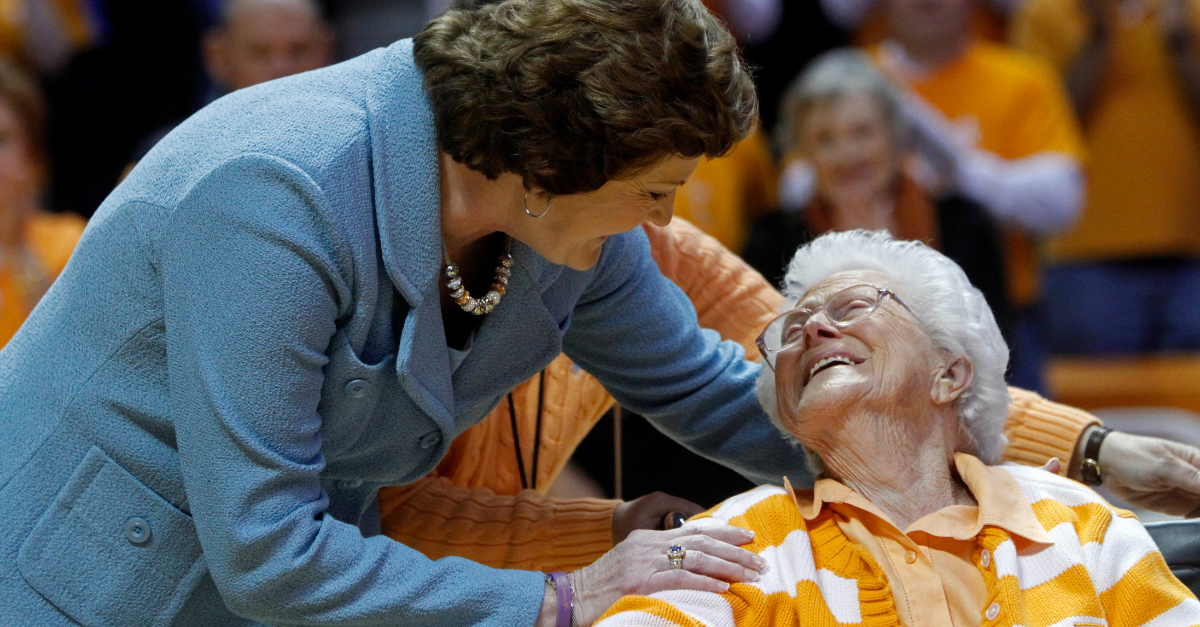 For 38 seasons, the Tennessee Volunteers women’s basketball team was led by iconic head coach Pat Summitt. During that time, the Lady Vols qualified for the NCAA Tournament every season from 1981 through 2011, advanced to the Final Four 18 times, and captured eight national championships during her tenure. Even more importantly, every Lady Volunteers player who completed her eligibility under Summitt graduated with their degree from the University of Tennessee.

Every great story has an iconic figure who starts that journey and plants the seeds of success. For Summitt, that was her father and mother, Richard and Hazel Albright Head. Summitt’s father died in 2005 after a battle with cancer and 63 years of marriage. Sadly, Hazel Head died on Wednesday morning surrounded by her family members near Henrietta, Tennessee, according to her granddaughter. She was 93 years old.

Growing up in Henrietta and attending the University of Tennessee at Martin in the early 1970s meant that Pat Summitt, whose maiden name was Head, didn’t have the benefits of Title IX and had to pay her own way through college. Summitt had four other siblings — Tommy, Charles, Linda and Kenneth — so paying for school isn’t exactly the easiest task.

Thankfully for one of the greatest college basketball coaches to ever live, her mother and father were there to help, and she went on to earn All-American honors playing for coach Nadine Gearin.

“[Pat] always said ‘I am going to play in the Olympics,’ and she did,” Hazel Head said in a 2005 interview with the Knoxville News Sentinel. “She’s done well.”

Summitt, who died in 2016 after suffering from early onset Alzheimer’s Disease, was a co-captain of U.S. women’s national basketball team that won the silver medal at the 1976 Olympics in Montreal. It was just one of the many accomplishments she’d rack up during her career, all of which were closely watched by her mother.

Hazel Albright Head would regularly make the trip from her home in Henrietta to Knoxville to watch Lady Vols basketball dominate under her famous daughter’s leadership. During that time, she created a legacy all her own, and the Lady Vols Legacy & Legends Foundation honored her by remembering how “she supported and loved us through food for the soul.. good cooking and a lot of LOVE!”

RELATED: You Knew UConn Women’s Basketball Was Good, But This Stat is Ridiculous

The Pat Summitt Foundation, which was established in the iconic women’s basketball coach’s name, works to find a cure for Alzheimer’s. Pat Summitt’s only son, Tyler Summitt, is a member of the foundation’s advisory board, and they honored his grandmother’s life as well.

It is with great sadness, we announce the passing of Hazel Head, mother of Pat Summitt.

Her granddaughter, Casey Davis, who Head had lived with after suffering a small stroke last October, recalled how her grandmother would make “big, homemade meals” for their family.

“She’s been the hand that held us all together,” Davis told the Knoxville News Sentinel. “Family was the most important thing to her besides God.”

The Volunteer community lost one its biggest fans, but Hazel Head’s legacy is not forgotten. She’s survived by nine grandchildren and 24 great-grandchildren. It’s safe to say her incredible spirit, and the wisdom and love she passed to her family, will carry on forever.