The Providence College Friars are in the midst of a storybook season. Featuring a senior- and super-senior-laden roster, Head Coach Ed Cooley's squad has been ranked in the Top 25 for much of the season and secured its first Big East regular-season title in program history before the calendar even flipped to March. Sitting at 24-4 (14-3 in conference), Providence held the number one seed in the Big East Tournament, and looked to will head to Madison Square Garden looking to improve their resume before Selection Sunday.

Things didn't go as planned at MSG, but the Friars are looking ahead to the NCAA Tournament, where they're the 4-seed in the Midwest Region. And they're bringing a special musical tribute with them. 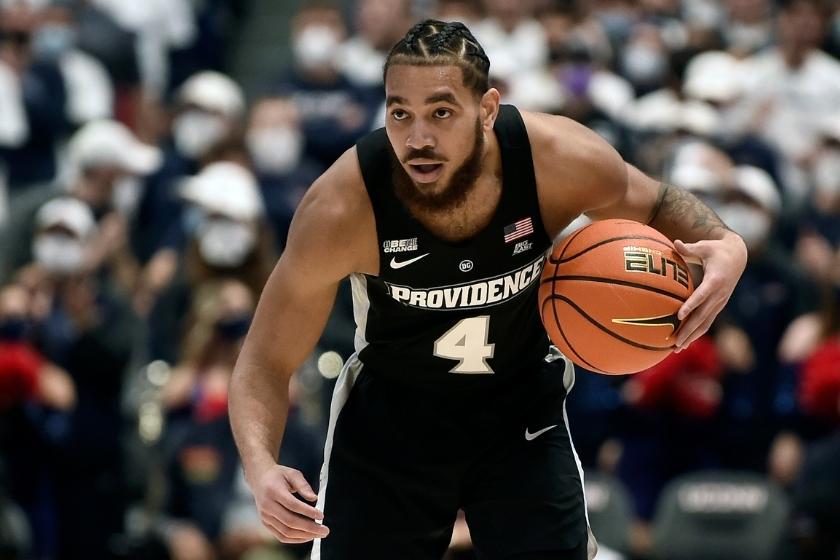 Bruising big man Nate Watson, big-shot making Jared Bynum, and cool-under-pressure Al Durham have all keyed the Friars' 24-4 (14-3 in conference) success. Another crucial element? A raucous home-court environment. Providence is 16-1 at the Dunkin' Donuts Center, affectionately known as "The Dunk."

Side note - is there a more appropriate pairing for an arena naming rights' sponsor and a city than Dunkin' Donuts and Providence? There are 164 Dunkin' stores in Rhode Island. Rhode Island's population is 1.059 million. Roughly, that works out to one Dunkin' every 7 square miles, edging out Massachusetts, which has one Dunkin' for every 10 square miles. Some serious Dunkin' deserts in Massachusetts.

But it's not just iced coffee that's given the Friars a home-court advantage this year. If you tuned into any PC home game in the last few months - particularly a close game down the stretch, which was most of them - it was impossible not to notice hundreds of students belting a song at the top of their lungs. Taylor Swift's "You Belong With Me," her hit single from 2009, has become a mainstay at Friars games. While the basketball team sweats out close battles against the best of the Big East, the student section goes absolutely bonkers for a decade-old song about unrequited teenage love.

According to The Boston Globe, the phenomenon started in December when a few students asked the in-arena DJ to add T-Swift to his rotation. Within a few games, it became a mainstay at The Dunk:

"You belong with me," by Taylor Swift.

My favorite part of that video is the very clear divide between the student section and the rest of the arena. Providence College mens' basketball is treated like a professional sport in Rhode Island. Season ticket holders come from all walks of life: alums, Rhode Islanders with no formal ties to the institution save for a lifelong fanhood, and state politicos looking to see and be seen. Point is - outside of the student section? Not a lot of love for Taylor Swift. Probably more of an "I think my kid used to play that song in the car when they were younger, why the hell are they all singing it with 3 and a half minutes to go against Villanova?" vibe.

For his part, Coach Cooley seems to be into it, tweeting his approval back in February:

Swift owns a home in Watch Hill, a beach community in Westerly, Rhode Island, about an hour south on 95 from The Dunk. Sadly, although the Dunkin' Donuts Center Twitter account extended an invitation, Swift did not make an appearance in Providence this season. Some Friar fans believe her presence may have given the Friars an edge over Villanova in their February meeting, Providence's lone home loss of the season.

For New England sports fans, embracing a random pop song along with the identity of a specific team is not a new occurrence. The 2021 Red Sox used the Calum Scott, DJ Tiesto remix of Robyn's "Dancing On My Own" - another catchy tune about unrequited love - as an anthem throughout the playoffs. What do the lyrics "I'm here in the corner, watching you kiss her," have to do with walk-off home runs or gutsy pitching performances? About as much as "You're on the phone with your girlfriend, she's upset" has to do with hitting free throws down the stretch. Absolutely everything.

"You Belong With Me" is a perfectly nonsensical anthem for a seemingly nonsensical team. In early January, prominent college basketball analyst Jeff Goodman labeled the Friars the luckiest team in the nation, citing a combination of close, tight wins and playing a few teams who were missing key players. This refrain has been kept up by other talking heads who cite Providence's lackluster KenPom ranking (they currently sit at 32, which is actually about 10 spots higher than they've been for much of the season) as proof-positive that the Friars are a ticking time bomb who will self combust at any moment and come careening back to earth.

Instead, Cooley's veteran-led team continues to pull out close wins, even if it takes triple overtime. Their chorus of '"Be Them Dudes" seems to leave them invulnerable to nerves when the game gets close and late. Put simply, Providence does not beat itself. They embrace close games, just as the fans have embraced the lucky moniker, showing up to games with giant shamrock signs.

Providence played their last home game of the season, a romp over Creighton that secured their Big East regular-season title. Does this mean the Friars have heard T-Swift for the last time this season? Unless the higher-seeded team gets a say in what music is played at a neutral arena, it seems pretty unlikely that the March Madness DJs will cue up Swifty of their own volition. However - the Providence College Pep Band should be in attendance at a handful of March Madness games. Friar fans better hope they're working on a brass arrangement of "You Belong With Me" as I type.

Picked to finish 7th in the Big East in a preseason poll, Providence continues to exceed expectations, as they snagged the 4th seed in the Midwest Region of the 2022 NCAA Tournament. Many thought the Friars did not belong in a conversation with the best teams in college basketball. Many thought "You Belong With Me" did not belong in a conversation about the best in-arena pump-up songs. Clearly, the pundits don't always get it right.