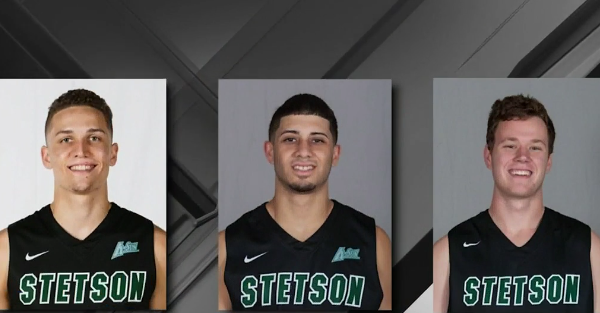 Three players from Stetson University have been suspended, and one faces criminal charges, in an apparent road rage incident on a Florida Highway, according to a report on WKMG-TV.

A driver told Florida authorities that someone in a dark-colored Mercedes shot at him. After a search, police found the suspect vehicle with three Stetson basketball players inside.

The three players claimed they used a bb-gun to shoot at a car they thought was driving recklessly, police told WKMG.

Grant Lozoya, 21, was arrested on suspicion of shooting into an occupied vehicle and aggravated assault with a deadly weapon, and he quickly bonded out, WKMG said. Two other who were in the car ? the driver, Angel Rivera, 23 and Will Hollmann, 20, a forward center with the Hatters who was in the back seat ? were not arrested.

While Lozoya, a guard, was listed on this year?s roster, but the season-ending statistics don?t show his name.  Rivera played in 30 games and was fourth on the team in scoring at 8.0 PPG; Hollman appeared in six games.

WMMG  reports all three have been indefinitely suspended.